Chairman Hamilton resigns from College of DuPage Board 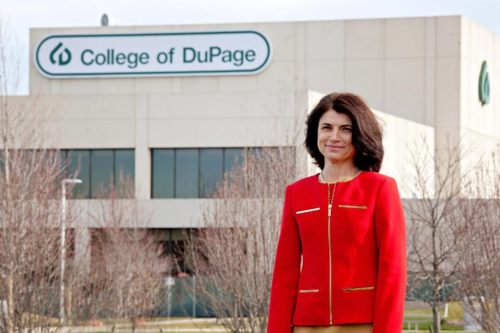 WHEATON – After having fought as a lone reform member of the College of DuPage Board of Trustees for months, then working hard to elect a like-minded majority committed to making board decisions and the college's finances transparent to DuPage County taxpayers, COD Board Chairman Kathy Hamilton resigned from her post Sunday night.

Hamilton, who joined the COD board in April 2013, placed the following excerpt from a resignation letter on her Facebook page at 9:00 PM, saying,

It is with sadness, then, that for personal reasons I am resigning from this Board effective immediately. I have enjoyed working together with my fellow trustees to build upon the strengths of COD and address its future needs. I will miss the collaboration and energetic debate that marks the COD Board as one that is caring and committed to all of its stakeholders.

Thank you for your support. From your first votes to your continuing encouraging words, you have provided support — and corrections when needed — that have enabled me to do my very best. I am so grateful for that.

The battle for COD's budget transparency was brutal, and after the board's firing of COD College President Dr. Robert Breuder, he immediately initiated a lawsuit against the board and specifically against Hamilton and the other three board members that he claimed "wrongfully terminated " him from his position. The details of Breuder's complaints were detailed in a Daily Herald story on October 21, 2015.