Returning from D.C. trip, Marter pushes ahead to challenge Kirk for U.S. Senate 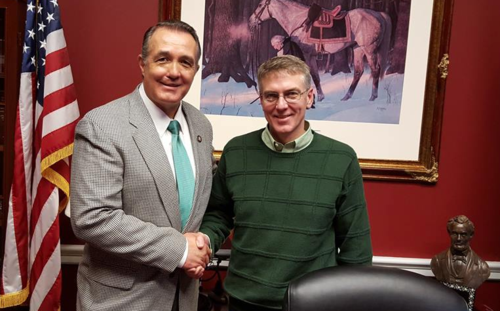 "My enthusiasm goes beyond agreement with Mr. Marter on issues affecting our citizenry and government. It is clear he has the will, instincts and integrity to work repairing the contemporary damage done to the first principles built into our institutions by America's Founders," Trent endorsed.

Franks congratulated Marter for stepping up against an "out of touch" incumbent.

"When no one else in Illinois would, Mr. Marter has stepped up to oust an incumbent out of touch with the people of Illinois who has repeatedly voted against his constituents and his party, harming the people's liberty protected by the United States Constitution."

Franks was the first endorsement to bag since returning from D.C., and more could be coming.

"I spoke with several members of Congress and held private meetings with leading conservative groups, and they were all encouraging," Marter told Illinois Review. "For the most part, all had scratched Illinois off their radar, thinking that if Kirk were the GOP candidate, they would lose this U.S. Senate seat in November."

Now Marter is focused on taking his campaign message throughout the state – a message that is the polar opposite of Republican incumbent Mark Kirk's on almost all issues.

“I appreciate everything that James is going to bring because number one he’s going to defund Planned Parenthood,” Harlan told local press.  “Mark Kirk doesn’t believe in doing that.”

Marter has been making appearances at events where Senator Kirk will not appear – specifically pro-life rallies and gun shows. Those venues are where Marter's message is embraced.

The Illinois GOP Establishment is jealously guarding Kirk's incumbency, and county chairmen report off-the-record that Kirk campaign staffers have been doing all they can to intimidate GOP leaders to ignore Marter and back Kirk – if they want to retain their party leadership status.

Because of the pressure behind the scenes, Marter is making more appearances at Tea Party events throughout the state – as he'll be appearing at the Huntley Area Tea Party on Wednesday February 3.

"Jim Marter has a passion and a premise that the people of the State of Illinois should have a Senator who is looking out for them, and not powerful corporations or lobbyists," the party wrote in a recent announcement about the Marter event.

"He knows we share many concerns that face our nation today.  We need to work together to bring the original purpose of our constitution and limited government back to our great nation; and return to our country's foundations of Life and Liberty.  It is time to send a Senator to Washington D.C. whose first interest is the Liberty and Security of the American citizen taxpayer."

Those sentiments are voiced throughout the state in support of Marter, who has limited campaign funds and volunteer staff.

Those supporting him suggest that Marter could defeat Kirk in the March 15th primary because Kirk consistently votes with Democrats and Leftists on social issues. He has one of the lowest ratings among the National Rifle Association and pro-life groups.

"Incumbent Illinois Senator Mark Kirk's voting record is out of touch with Illinois values. He is a consistent supporter of gun control, a history of opposing school choice, voted NO against Kate's Law ending unlawful Sanctuary City Status," the Huntley Tea Party wrote.

"He has opposed almost every effort to significantly cut spending or balance the budget, and finally Mark Kirk is the only sitting Republican senator to have voted FOR Cap and Trade energy taxes and AGAINST defunding Planned Parenthood. He is failing us, the people of Illinois."

Kirk's campaign typically chooses not to respond to queries about Marter, reflecting confidence that their candidate will easily win the GOP primary, leaving Republican voters no choice in November but to support Kirk and maintain the Republican majority in the U.S. Senate.

However, those who gathered petition signatures say that GOP rank and file happily signed Marter petitions while it's been reported that the Kirk campaign was forced to pay $5 per signature in the closing days of signature gathering.

"We'll see how easily Kirk wins in March," one Marter supporter said. "And if he does, he won't get my vote in November."