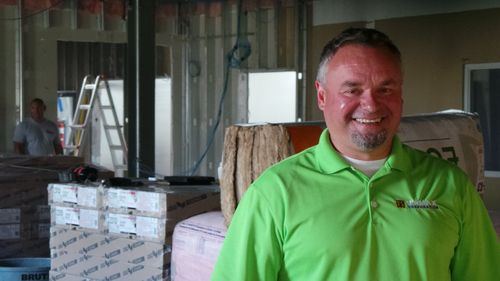 LAKE ZURICH – When Wes Gardocki joined Termax Corporation in 2001, he was hired on as a quality manager. Soon after, he moved into production, and became production manager. He then moved up to director of operations, then vice-president, and as of January 2015, he is now the company’s president.

The company Gardocki presides over has just expanded into a 120,000 square foot building in Lake Zurich, Illinois. Termax employs 420 in its expanding array of facilities from Chicago’s far northern suburban manufacturing plant to warehouses in Korea, China, Canada and Mexico.

Gardocki, 48, started working in manufacturing as a grinding machine operator right out of high school. He was 15 years old when his father died, and he stepped in, taking on family responsibilities as the oldest son.

“My Polish immigrant mother did not believe in debt, so borrowing money to go to college was out of the question,” he said.

Gardocki worked a little over a year until Ford hit a rough spot, and he was laid off and forced to find work elsewhere.

“That’s when I started working for Bill and Jim Schneider at O’Hare Spring,” he said. “I loved working for them. They mentored me and took a chance with me when I didn’t have much experience.”

Gardocki worked there for ten years and left when the opportunity at Termax opened up.

Termax’s owners, Bill and Mike Smith are the sons of Ed Smith, who started the company in 1971. Eighteen years ago, the sons took over the business when their father moved to Florida.

While the Smith brothers remain engaged in Termax, much of the day-to-day work was turned over earlier this year to Gardocki and “the best team on earth,” as Gardocki calls them.

Termax Corporation itself specializes in metal and plastic fastener solutions.  While they primarily service the automotive industry, their products and services are used by many organizations that require quality engineered clips and fasteners.  Other industries include appliances, lighting, toys, construction, and automotive aftermarket providers.

When TMA spoke with Gardocki in his Lake Zurich office, he had just returned from an encouraging visit to General Motor’s Arlington Texas plant.

While there are plenty of challenges as Termax grows, there are lots of rewards, he said.

“I find rewards in what our customers say about us. In the Arlington assembly plant it was good to hear that they love working with us,” he said.  “They said that we respond more quickly than our competitors. That’s because we work to build customer service at all levels – including engineering and sales – in every single department.”

Because Termax is providing fasteners worldwide, the economic conditions in countries on the other side of the globe makes a difference in what happens in Lake Zurich, he said.

For instance, China’s recent economic downturn has affected the demands on their China warehouse.  Most people don’t realize that for years more GM cars were being sold in China than in the United States, he said.

“All our fasteners are manufactured in the United States, but once a month we ship parts to China,” he said. “They distribute the parts from our Shanghai warehouse.

“We’re committed to China, and intend to stick it out. Automotive demands will be back again.”

Gardocki said his Termax team has the United States’ 2008-2009 recession still fresh on their minds. It was a tough time when the automotive demands hit bottom then, he said.  Termax was forced to lay off a majority of their employees in June 2009 and wait out the downturn.

During those months, Termax upgraded their management system and manufacturing processes.

“We cleaned them out as an investment in the future,” he said.

But in August of 2009, it was like someone turned the switch, and Termax was back on track.

“You can take a lot of good out of the bad,” Gardocki said. “The whole management team will never forget that tough time.”

Now Termax is looking to the future, and like other manufacturers, searching for qualified team members.  They’re working with TMA and Harper College to fill the openings they’ll be having in the days to come.

“We’re very pleased with the three that have come to us from TMA training,” he said.

“Altogether, we have the greatest team on earth here at Termax. My team will bend over backwards to help each other and the customers. Our managers pull together and respect one another. These guys are the greatest,” he said.

Gardocki, who is married with two daughters – one in high school and the other in college – is very happy at Termax. The Smith brothers have entrusted him with increasing the company’s products and impact. He takes that responsibility very seriously.

“I hope I’m lucky enough to retire from this company. I’ve been blessed for the past 14 years – I don’t feel like an employee and I never have dreaded getting up in the morning,” he said. “My work is for the employees of Termax.” Termax Corporation’s corporate office is located at 1155 Rose Rd Lake Zurich, IL  60047 or on the web at Termax.com.