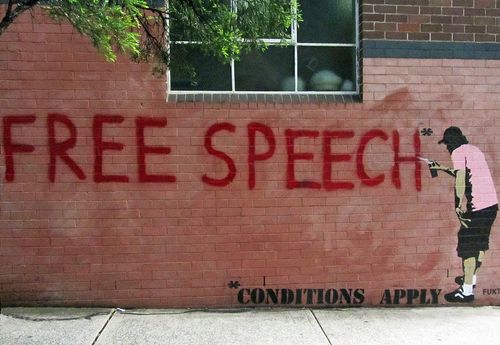 I feel compelled to say something about free speech. It’s horrifying to many of us that this matter even needs to be explained, but sadly, our First Amendment guarantees are tragically misunderstood nowadays.

What you’re about to read may be new to many, particularly to those who've attended school in the past 50 years or so, since modern leftism destroyed political education in America.

In sum: Our right to free speech does not apply to just anything that anyone wants to say or do, at any volume, at any time.

For something to be your right, it cannot create an inherent imposition upon someone else.

There are laws about pornography and child abuse, about slander and libel, and about public safety that set logical boundaries in the way of the excesses that I described above.

And there are thousands of other similar rules to manage the risks of other crimes that some people will often claim (equally wrongly) to fall under the protective mantle of "free speech."

In fact, free speech is about your right to write something political; it does not compel anyone to publish it.

And free speech is about your right to speak freely about politics in the public square; it does not compel anyone to stand around and listen.

And free speech is about your right to offer a political statement in a blog, a newsletter, a brochure or flyer; it is not a command that anyone within earshot actually listen to you.

Free speech is a two-way street; both the speaker and the audience must be respected.

When someone shouts down a politician in an indoor rally that the politician's campaign (or a donor, or a host organization) contracted and paid for, then that heckler is NOT engaging in his own right to free speech.

Rather, that heckler is violating the free speech rights of everyone else in that hall.

When I was a young movement conservative in the 1980s, I participated in plenty of protests. The Left would be inside a venue, and we would set up our demonstration across the street from the entrance. We'd hold up our banners, distribute literature, maybe yell a slogan or two… but we NEVER tried to gain entry to the event and disrupt it from inside. That would be wrong.

The Black Lives Matter crowd – and all the other leftist thugs who've been disrupting Donald Trump rallies lately – are proving the intellectual and moral bankruptcy of their side of the aisle.

That's not a reason to vote for Trump, of course (he’s as liberal as they are on a lot of things), but all those demonstrations have indeed been helping his campaign, and further coarsening the public discourse in this difficult year.

I'm glad I support Ted Cruz. Both that candidate, and his supporters, are capable of not only citing the First Amendment, but understanding it as well.

In this – or any – campaign year, we need to both listen to the candidates and study their records, without fear that bullies and loudmouths will prevent the voters from learning the information we need to make one of the most important decisions we make in our lives: the election day decision to determine whether America is going to continue on the long, painful road to big-government totalitarianism, or if 2016 will be the year we return to the right path, and again set America on track for the limitless potential available only with limited government.

John F. Di Leo is a Chicago-based writer and trade compliance lecturer. His columns are regularly found in Illinois Review.