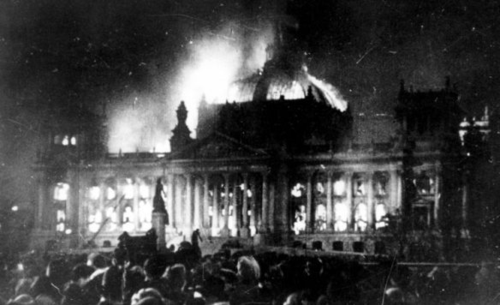 Breaking News: Republican Presidential candidate, Donald J. Trump came out this morning and condemned last night’s burning of the Reichstag: “We will find these thugs and the culprits will be brought to justice.”

In other news, Trump campaign manager, Corey Lewandowski, is being treated for 3rd degree burns to his hands that he suffered while cleaning the family grill. He will have to postpone the deposition that was scheduled for his alleged assault of Breitbart journalist, Michelle Fields.

NOTE TO TRUMP WHINERS AND RECENT FREEDOM OF SPEECH ENTHUSIASTS:

Yes, BLM and MoveOn.org are scum who don’t believe in the American way but “Don’t Cry for me Argentina,” – your candidate chose a liberal college in a liberal city to put on a show. If UIC didn’t screw him, Rahm Emanuel would have.

Was this purposeful or just naive? You decide.

Frank Luntz tweeted, “Trump schedules rallies in middle of cities, where he knows they’ll be met by many protesters – and media coverage,” and shared the line from Denzel Washington’s Training Day – “This sh** is chess, it’s not checkers.”

If only Chicago had that strong commitment to peace that the Chinese displayed in Tiananmen Square, that Donald Trump admires so much.

Yes, the fault lies with fascist scum who interrupted this event but I’m not shedding one tear for the sudden loss of “Freedom of Speech” for a guy who has had more free air time from the Pravda Press than Kim Kardashian’s nude selfie.

This is Chicago. By the way, a city which Trump maneuvered quite adeptly when he was building a Tower on the river. There were no protests then, all the liberal candidates that are condemning him now were cashing his crony checks then.

So Trumpty Dumpty can tell his story walking. He had to know what would happen in Chicago. And maybe he should have Cowboy’d up and gave his speech in front of the building that bears his name.

If you want to throw blame around it goes something like this: 65% BLM and MoveOn.org, 25% the guy who encourages his crowds to get physical with protesters, throw them out, punch them in the nose and he’ll pick up the tab, and 10% the staffers who put the event together – that is, if it wasn’t contrived to produce an effect.

If it was contrived, then congrats to the propagandists in the campaign who are pulling the strings and banging to drums to get the sheeple to dance. Burning the Chicago Reichstag was a great move!

“Have you ever wondered what would happen when warring factions of phony victims — white nationalists on the Right, and Occupy/Black Lives Matters types on the Left — feel mutually emboldened to display their thuggery?  Well, now you know.

This must be the unity Ben Carson was seeking this morning. Ironic this comes the very next night after Trump said his protesters were cruising for a bruising and he praised Tiananmen Square.

This is like watching the Bolsheviks and the Mensheviks, or the communists fighting the nationalists on the streets of Berlin in the 1920s. It’s what happens when a Constitution and moral tradition that binds a people is abandoned, and everyone does what is wise in their own eyes. And it grieves my soul.