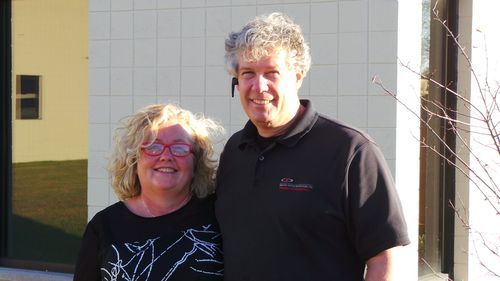 MACHESNEY PARK – Teresa Beach-Shelow was busy volunteering with two daughters’ activities and developing a career in banking when her husband Thom launched a new business in their garage.

That year – 1992 – spelled dramatic change for the whole family.

Thom’s knowledge of precision welding and laser technology matched up with Teresa’s skills in business and finance, Superior Joining Technologies took off, and the Shelows haven’t looked back.

Superior Joining is now in its 24th year, and is in the process of completing the company’s fourth move – this time to a 55,000 square foot facility, 20 times larger than the family garage where it all began.

“We’ve bought every paper clip we’ve ever had,” Teresa told the News Bulletin. “We didn’t have a thing when we started.”

Superior Joining started 2015 with 19 employees, and by the end of the year, they had 26 in their crew. They added seven new pieces of equipment for the new building, and with that, the needed new personnel.

Most of Teresa and Thom’s work is in the aerospace industry, with vendors as far away as Canada and Mexico that they’ve drawn in via their website. While that’s great for business, Teresa says she sees a real need to develop Rockford area businesses to take in more projects from the Chicago region.

“The Rockford community is 25 to 35 percent manufacturing,” she said. “We’re trying to grow it down the I-90 corridor to Chicago.”

Teresa says she’ll be able to devote more time to expanding that network – which includes the Technology and Manufacturing Association – as her focus moves on from the current time-consuming project of renovating a new building.

Teresa and Thom designed the new floor plan themselves. The changes include moving inventory to be on site.

“We will have open offices here, a community room for regional meetings, the shop itself, and a lunch room,” she pointed out during a brief tour of the new facility with TMA. “The last big project is Thom’s welding booths.”

In addition, Superior Joining is also preparing to offer 3-D printing in their research and development department.

All the growth and changes presents a whole new set of challenges for Superior Joining, as it brings for any organization going through major expansion.

“Number 1, growth is challenge. We’re in a good position to grow, but success can be a downfall to companies. We’re focused on being able to manage it,” Teresa said.

“Secondly, we face a big change in relocating the facility. We are figuring out how best to manage our projects and communicate efficiently among our staff,” she said. “And third, we’re learning how to best do sales for the new processes we’re doing.”

And while they’d have understandable reason to set aside community activities during this time of company growth, both Thom and Teresa continue to reach out to the community. Among numerous other civic projects, they sponsor annual dinners for Rockford area manufacturers.

“We enjoy sponsoring the Manufacturing Council Dinner,” she said. “It brings the company notoriety, brings us satisfaction and helps the community.

Teresa has been president of the Northern Illinois Chapter of Association of Women in the Metal Industries, and co-founder of Women of Today’s Manufacturing, as well as chairman of TMA’s Manufacturing Women’s events in 2015.

After all, for Teresa manufacturing is exciting.

“What’s better than a manufacturing tour or doing to dinner with another manufacturer?” she asked.

Teresa spearheaded the creation of Camp Manufacturing, a one-week experience for 8th, 9th and 10th graders to promote industrial careers. She also established a scholarship program for the camp through the Community Foundation of Northern Illinois.

Teresa and Thom continue to volunteer sponsoring local school club that place science, technology, education and math focuses on robotics, such as the Rockford Robotics and Flaming Monkeys.

“Tom and I feel strongly about encouraging young people,” she said. And that was clearly evident during an after-school meeting at the Eisenhower Middle School where Teresa and Thom volunteer to assist with coaching the robotics team.

Thom listened intently as a group of middle-schoolers discussed their latest assignment to design a mechanism to recycle trash.

“Sounds like a good idea. Maybe you could do it this way,” he told the 7th and 8th graders, tapping into his experience as a manufacturer.

Teresa’s past of school volunteering was evident with the quiet patience she showed with the club members’ somewhat illogical, but original and creative, proposals.

“The future of manufacturing is in our young people,” Teresa said. “We see our time with them as an investment in our community and manufacturing’s future.”