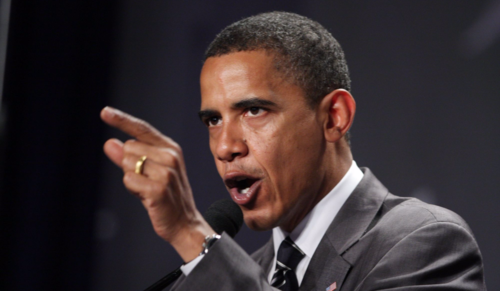 On May 27, 2016, Barack Hussein Obama, the current resident of the White House, gave a “major speech” (defined loosely as “one that the global press eagerly covers, in the hope it will embarrass the United States”) at Hiroshima, Japan, site of one of the two atomic bomb blasts that the United States relied upon to bring an end to World War II.

Given just before our own Memorial Day commemoration, it was not a horrifying speech on the surface… reading through the transcript, one sees nothing that jumps out as a specific mark of insult or error.

Obama spoke of how war has always been with us, how wars are horrible things, how they may be fought over hunger or greed, how we should mourn the innocent dead.  Line by line, almost everything he said there is defensible, when taken out of context.

It is only upon reading it in full, recognizing what he chose to say, and what he chose not to say, that one realizes how malicious the speech was… especially when the timing is considered.

The Moral Equivalency of the Left

There are certain themes in the modern statist lexicon.  A confusion of the difference between rights and privileges, a denial of the basic laws of economics, a contortionist’s twisting of the value of a colorblind society into the championing of a quota-based society.

And one of the most fundamental of these errant leftist themes is the concept of moral equivalency.: The burglar has an equal right to those possessions as the homeowner has; the mugger has an equal right to that wallet as his victim has.  You can’t blame the gang member for robbing and raping and killing; you’d do it too if you lived in his neighborhood… and so it goes. Moral equivalency, everywhere.

Such a position isn’t accidental.  Just as a building is built on foundation, the whole of Democrat policy is rooted in the concept of moral equivalency.  Without moral equivalency, you cannot justify robbing the working man to fund a welfare state, or turning a blind eye to the terrorism of Hamas while denouncing the identical terrorism of the Taliban.

So moral equivalency appears throughout Obama’s Hiroshima speech.  Only  upon careful reading do we see that there is no mention of the critical fact that Imperial Japan started the war with the United States, no distinction between the two sides at all… no mention of the fact that nothing but the use of nuclear weapons would end the war with such a stubborn and suicidal enemy.

His speech speaks of the casualties of war, the loss of innocent lives… but doesn’t say “all because Japan’s megalomaniac rulers started the war.”   He left that part out – the critical premise with which any thoughtful analysis of the war in the Pacific must begin. He lamented the loss of innocent life at Hiroshima, but didn't say a word about the millions of victims of Imperial Japan's war crimes – the Rape of Nanking, the Bataan Death March, the Manila Massacres, and most important, Hirohito's "Three Alls Policy" – all of which demonstrates that Imperial Japan simply had no moral high ground to claim in 1945.

It’s understandable that he wouldn’t want to say all that out loud… who would?  Japan is our friend today; we shouldn’t go there to remind them of an evil, but long past, moment in their history.  That would hardly be diplomatic…   but it is a necessary part of the narrative, and lacking that part, the event is incomplete, and even deceptive.  That’s why no other American president has gone to Hiroshima.  You don’t go to a friend’s house to remind him of his past failings, so, as friends, we just don’t bring it up.

The audience who listens to this speech doesn’t get the message that “America has forgiven Japan for pulling us into that awful war.”   They don’t need to; our close trade relations prove it already.  Today’s United States and today’s Japan are friends, with massive corporate investment in each other’s countries already.  Our citizens work for their conglomerates; their citizens work for ours.

But… as necessary as it is to acknowledge that we have no reason to hold WWII against today’s Japanese, it is just as necessary to acknowledge that we do NOT forgive the Japanese leaders of the 1930s and 40s, the ones who started the war: the megalomaniac Hirohito and his general staff who chose to launch a sneak attack on our Pacific fleet, in time of peace, before even declaring war, and then to continue committing war crimes against us and everyone else until we stopped them.

If we forgive the villains of Imperial Japan, those war criminals who tortured American prisoners of war and made sex slaves of Korean captives and murdered millions of innocents, then we are saying that anyone deserves a second chance, that past performance doesn’t matter, because each day is a new day with a clean slate.

Such moral equivalency flies in the face of judgment, and sews a poisonous thread into every practice of a free country… our elections, our career choices, our education.   Obama’s Hiroshima speech contradicts such critical truisms as the famous Santayana quote “Those who cannot remember the past are condemned to repeat it."

We must study history, not only for the facts of what happened, but also for the recognition of who made the mistakes.  What kind of leaders started World War II?  What kind of people ordered the atrocities? What kind of positions should we look out for in our own lives, as we face our own personal trials, especially in the voting booth?

Barack Obama does nothing by mistake.  If he delivers a speech that gives the impression that the United States and Imperial Japan were morally equivalent, then that can only be because he wants to reduce America’s recognition of our own moral righteousness during the horrible period of the 1940s.  For 70 years, America and Great Britain have been the world heroes who saved the world from Hirohito, Hitler and Mussolini.  And that fact grates on the nerves of the modern Left.

The Left wants the world to see equivalency:  "We both suffered, we both committed evil acts, we both killed millions."  They dropped bombs and we dropped bombs.  In fact, we dropped the biggest ones.  Nobody’s better than anyone else, nobody’s worse…   Tell every tale in a vacuum; never share the necessary context; this is the theme of Barack Obama’s speech at Hiroshima.

How much would it have hurt to just add a single line:  “From the very day when Imperial Japan’s unprovoked attack on our installation at Pearl Harbor pulled our nation into that painful war, our nation strove to find a way to bring it to an end…”  But no; the very reason that line is critical to the truth of the matter is the reason that Obama would never say it.  He needs to blame America for dropping the bomb on Hiroshima; his worldview depends on assigning as much blame as possible to the United States – on every problem there ever is to address.

The Power of the Presidency

We pundits – both the professional kind and the armchair kind – carefully track the evil actions of criminals in government.  We report on the newest awful spending bill, the latest encroachment upon our liberties, the latest foolishness of a nanny state.  And we are right to do so, as confiscatory taxes and crippling regulations do incalculable damage to our nation and the world around us.

The Presidency has, in the past century, become such a source for destructive government action, we sometimes forget the president’s other role in our polity: as the semi-official spokesman for our country, both domestically and on the world scene.

Theodore Roosevelt – no conservative he, but certainly a perceptive historian and a fine writer – recognized this aspect of the job like few others, and spoke reverentially of his office as wielding “the bully pulpit.” However strong a Speaker of the House or Senate Majority leader might be, only the president can give a speech that radio and television will carry, that foreign press will attend and report on, that school children may even study in school for centuries.

The Left understands this better than many on the Right.  After a president leaves office, the next president can undo his Executive Orders, the next Congress can repeal his tax increases, the next administration can revoke books of regulations.

But a president’s speeches live on in more than just the national archives…  Just as good people still proudly read George Washington and Abraham Lincoln, and as we still watch Ronald Reagan on YouTube today, children will read and watch the speeches of Barack Obama for a hundred years.  And what will they learn from those speeches?

Obama’s written and spoken legacy – after eight years in the office – will be an unbroken record of attacks on the American people and on our way of life.  In speech after speech, he has attacked our record for “meddling” in world affairs, for being “imperialistic” abroad and “paternalistic” at home.  On hundreds of occasions, he has become known for certain offensive catch phrases, such as “That’s not who we are”… as if he were in any way representative of the true American character.

Obama has spent his presidency amassing his own history sourcework, to be played and read in schools, to be fed into the innocent minds of students, so that future children will be raised independently from the pro-American atmosphere of past generations.

Obama’s legacy of speeches is a war engine of its own.  In post-educational America, and across the world, his speeches are their own atomic bomb, as destructive to historical truth as the actual bombs were to their sadly necessary physical targets, seventy long years ago.

When America votes… and especially, when we vote for a president… we must consider how that president will speak in public.  What will he say; what image will he convey as he teaches the world’s future children what it is to be an American, and what America’s role is – and has been – on the world stage?

There was a time when America’s leaders were eloquent spokesmen; their every word was an homage to the American experiment.  America needs men of the caliber of Washington, Hamilton, Morris, Webster… even recently, we still came close, with men like Goldwater, Reagan and Buckley…

And we are lost without them.

John F. Di Leo is an international trade trainer and writer, based in Chicagoland.  A former county chairman of the Milwaukee County Republican Party, he has now been a recovering politician for nineteen years.

Permission is hereby granted to forward freely, provided it is uncut and the IR URL and byline are included.  Follow John F. Di Leo on Facebook or LinkedIn, or on Twitter at @johnfdileo.

By James P. Economos DDS, DDSGiven the recent amount...
Previous article
Zender: Senate Bill 1564 Puts the Government Between a Woman and Her Doctor
Next article
Starkehaus: So Bill Kristol nominates David French for president? Would that make Jonah Goldberg our next VP?