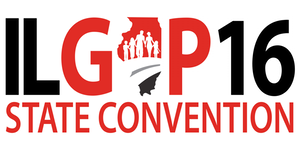 PEORIA – Any other year, IL GOP Convention delegates would ratify with a voice vote what the platform committee recommended to the committee of the whole – but this year, it won't be that easy.

We've confirmed that 70 delegation heads signed onto the effort.

The petitions had to be filed by 9:30 AM – and currently, the petitioners are meeting with the parliamentarian.

UPDATE x1: The Parliamentarian says the Minority Report maintaining the 2012 IL GOP language defining marriage as between one man and one woman will be voted on first with a standing vote and if that fails the majority amendment removing marriage will be voted on by voice vote.

Rumors are the vote may be moved up to the first vote, instead of towards the end of the session as planned.