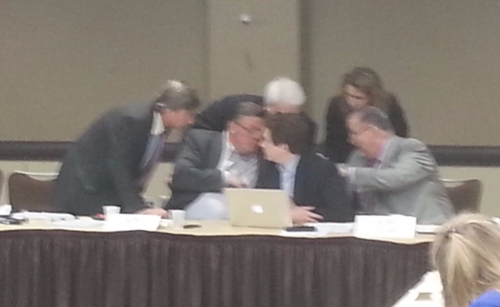 PEORIA – While the IL GOP Platform Committee was in heated discussion over the party's posted positions on social issues, in another room at the Peoria Civics Center, IL GOP Committee members picked through a list of 100 Republicans that applied to represent the state at the Republican National Convention in June.

The committee, led by one-time IL GOP Chairman and Capitol lobbyist Jack Dorgan, manuevered an unexpected nomination process that favored the first nominated with the help of other leadership – including the new Cook County GOP Chairman Sean Morrison. (See photo above)

Over 100 persons applied to be considered for at-large delegates, and the committee privately discussed eliminating 67 applicants before the meeting started. Pleased that they were able to whittle the list down to 33, Chairman Dorgan then called for nominations.

The first be nominated was Stephanie Holderfield, who won 50 percent plus of the committee's votes. Then committee member Jay Reyes nominated 10 candidates, leaving few open slots for the 12-person at large delegate slate. Those observing considered it unfair for the nominations to be voted upon in that manner – and now there's an effort to take the slate to the delegates Saturday.

The winning delegates the committee chose to recommend for the 2016 at-large delegate slate include:

Of the many that applied, few conservative Republicans made the final list of twelve that the committee is recommending to state convention delegates on Saturday.

But conservatives are not sitting still on this, one Republican told IR. There's an effort to petition committee members and delegation heads to take the slate recommendations to the delegates for a vote.