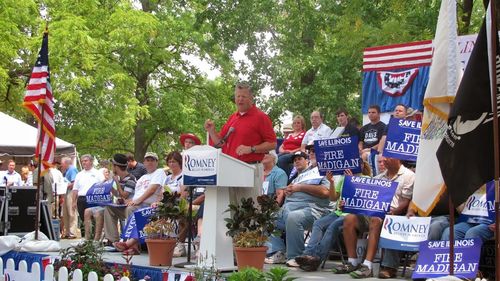 CHICAGO – If you have an idea for changing the 2016 GOP State Convention platform, you're welcome to join the conversation via the WeAreIllinois.com website.

Eighteen members of the Illinois Republican Party are currently discussing via conference calls changes they recommend should be made to the platform and presented to state convention delegates during the May 20-21st gathering at the Peoria State Convention Center.

In a recent report from Lake County, Republicans were warned that changes were being considered to the state's pro-life and traditional marriage planks.

“There are those who want to eliminate the pro-life and pro-marriage planks from the Illinois Republican Platform," Lake County Republicans' First Vice Chair Mike Danford said at a recent Lake County Right to Life gathering. "[Committee member] Pat Brady is one of them.”

Illinois Review reached out to Mr. Brady to confirm whether or not he is working to change the platform on life or marriage, and he declined to answer. In 2012, Brady told Illinois Review that he believed same sex marriage was an "equality issue", and that the "true conservative position is in favor" of allowing gay marriage. In 2013, Brady signed on with ACLU-Illinois to appeal to Republican legislators to support same sex marriage in Illinois. Shortly thereafter, the General Assembly passed the legislation and Governor Pat Quinn signed it into law.

Sources familiar with this year's platform committee discussions suggest that while the pro-life plank is always touchy, the biggest controversy appears to be more on the IL GOP's family plank. Whether the 2012 definition of marriage remains the same could be the most divisive issue with which the committee deals in 2016.

The current ILGOP wording that we were told is likely to divide the committee is found in Section V, "The Embrace of the Traditional Family" parts C and D – especially the words "one man and one woman" since Illinois voted to legalize same sex marriage:

The platform committee encourages suggestions to the platform to be submitted on the WeAreIllinois.com website this week.