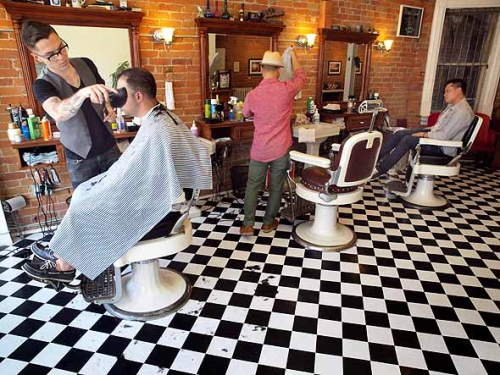 SPRINGFIELD – In case you haven't noticed, Illinoisans don't pay sales tax when they get their hair cut, learn to play a musical instrument, get their lawns mowed – you know, all those services in which cash transactions can occur.  Service cottage businesses often include favor exchanges, too – another frustrating challenge for taxation addicts.

But that small tax-less window in Illinois may be soon close after the November election, we've been warned. Governor Rauner is open to the idea of taxing services – 32 of them – in Illinois.

It's a totally different story just west of Illinois, though. The state of Missouri is seriously considering amending their state constitution to ban service taxes.

States have struggled to keep up the same revenue growth as they experienced before the recession. One big reason is that their earnings from sales taxes are declining. That's because these days, consumers are spending far more on services — most of which aren’t taxed — than goods, which are.

To remedy the situation, lawmakers have tried and had varying degrees of success expanding the sales tax to services. Massachusetts passed a tax on the cloud and quickly repealed it after the tech industry complained. Pennsylvania enacted the so-called "Netflix tax" on streaming video services. Washington, D.C., added a long list of services to be taxed: yoga, tanning and bowling, to name a few.

But in Missouri this fall, voters could put an end to all such efforts in their state. A first-of-its-kind proposed constitutional amendment would ban Missouri lawmakers from ever expanding the sales tax to services.

The ballot measure is, in part, a response to efforts across the country to lower the income tax in exchange for expanding the sales tax. While Missouri hasn’t seriously considered such a proposal, the legislature did have a heated debate this year over the Department of Revenue’s decision to start applying the state’s entertainment sales tax to activities like personal training, dance and gymnastics.

Scott Charton, a spokesperson for the ballot measure's backers, said expanding the sales tax is a “real threat” to poorer consumers. Doing so, he said, would actually benefit the wealthy because it would likely encourage reduced income taxes, particularly for top earners.

So service taxes are "regressive" – that means placing more burden on the lowest income taxpayers in the state.

If Governor Rauner is fine with it, where does that leave Republicans in the Illinois General Assembly that were elected on the premise they would be tax fighters?