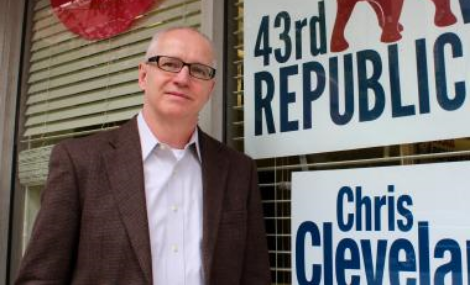 CHICAGO – The Chicago Republicans are happy about a decision in federal court that allows them to control the party affiliations of people serving in their party - something one would assume was the case, which wasn't, until this week's decision made it clear.

Now a person can't vote in Democrat primaries and serve as a Republican committeeman.

Late yesterday afternoon we scored a significant victory in federal court over Chicago Democrats and the Chicago Board of Elections. U.S. District Court Judge Milton Shadur ruled that we have a First Amendment right to prevent those who vote in Democratic primaries from being seated as Republican committeemen in Chicago, and to that extent our bylaws override state law. The net effect is that 13 ward committeemen have been permanently removed from office.

This ruling has broader implications for the Party in Illinois.

First, some background. In 2014 the Rauner campaign and the city, county, and state parties teamed up to recruit election judges in Chicago. The Rauner campaign wanted to ensure that we had genuine Republicans in every precinct to help reduce fraud.

It worked, and as a result Mike Madigan and Pat Quinn passed an amendment to the election code to make it harder for us. The amendment said that the county chairman could no longer place election judges; the power to do so would now fall to the ward committeeman. The Democrats knew that they could control some of the Republican ward committeemen and capture all of the election judge slots for themselves. To take advantage of the amendment, Democrats ran candidates in the 2016 primary for Republican ward committeeman across the city.

In response, I wrote an amendment to the Cook County bylaws that said that if you vote in a Democratic primary, you can't serve as a Republican committeeman. After the March primary we notified 13 would-be committeemen with Democratic voting histories that they could not serve.

Two of them filed a challenge before the Chicago Board of Elections seeking a ruling that they were, in fact, committeemen. In an astounding move, the Board ruled in their favor.

The CBOE has always favored the Democrats, but this was unprecedented. We responded by filing a federal civil rights case against the Board.

Normally, a Board of Elections does not put up a defense against such suits. As a supposedly-neutral third party they let the other side, in this case the Democrats, argue the case. But in an even more astounding move, the Board had their lawyer, paid for with public money, submit a very aggressive brief and actively argue the case on behalf of the Democrats.

The judge was floored and chastised the Board for its naked display of partisanship. The judge subsequently issued a permanent injunction against the Board, and later a final ruling against their position.

This case wasn't a close call. You can read some of the scathing language the judge had for the Board in the injunction and in the decision.

The broader legal implication of this case is that Mike Madigan cannot decide, through force of law, how the Republican Party operates in this state. As a Republican Party leader, I ask you to keep this in mind.

If Mike Madigan enacts a state law that unduly burdens our First Amendment rights, we can fight it and we can win.

Just to reiterate – your tax dollars paid for the legal representation the Board of Elections hired to argue on behalf of the Democrat Party.