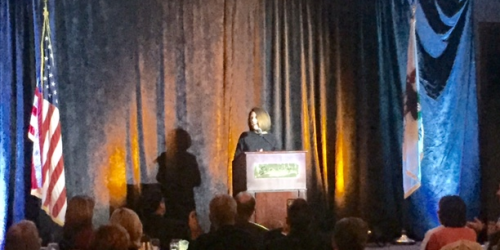 "Faith, Family, & Freedom Banquet" was the name of the annual gala sponsored by the Illinois Family Institute held at the Stonegate in Hoffman Estates this past Friday night. The keynote speaker was former Congresswoman Michelle Bachmann.

The event sold out with over 500 attendees. Mrs. Bachmann, a former presidential candidate, retired member of the U.S. House Representatives, mother of five, and foster mom to 23 children, spoke about "The Cost of Liberty." Her speech was taped and will be available on a DVD soon. It was an incredible speech on family values, limited government, and freedom. Afterwards she was gracious to speak with guests, sign autographs, and pose for photos. 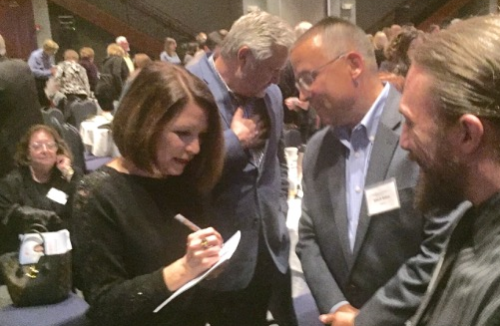 Before Mrs. Bachmann's speech, we feasted on romaine salad, roasted "airline" breast chicken in béarnaise sauce, roasted potatoes, and creme brûlée with fresh berries for dessert. The program started with a beautiful rendition of the national anthem sung by Debbie Kraulidis, followed by an inspirational prayer by Father Jerome Kish. Bishop Lance Davis did the benediction at the end of the evening.

The master of ceremonies was Julie Roys, the host of "Up for Debate" a talk show on the Moody Radio Network which is carried on 140 stations. One of the many great moments of the evening was presentation  of the "Voice of Truth" award to Jeanette Ward, Vicki Gwozdz Wilson and Cedra Credshaw. They have done wonderful grassroots work on protecting rights, security, and privacy for students in the public schools. They are involved in local school boards which are confronting  issues of which sex can use which locker rooms and bathrooms. All three are standing for traditional family values along with regular common sense.

There were a variety of elected officials and notable people in the room, including Congressman Randy Hultgren and radio talk host Stephanie Trussell from WLS 890-AM, as well as Dan Patlak, Dan Gott, Senator Dan McConchie, Ruth O'Connell, Heidi Holan, and State Rep. Tom Morrison.

Former Congressman and WIND 560-AM talk show Joe Walsh and his wife Helene encouraged people to get involved in his "day of action" coming up on Saturday October 15, 2016. He will be rallying over 1000 people to walk for candidates in the six county area.

The West Suburban Patriots had a large contingent attend, including their leaders Carol Davis and Jan Shaw.

The Illinois Family Institute (IFI) is an independent 501c(3) non-profit ministry dedicated to upholding and re-affirming marriage, family, life and liberty in Illinois. Since 1992, IFI has worked to advance public policy initiatives consistent with Judeo-Christian teachings and traditions, educating citizens so that they can better influence their local communities and the state.

Save the date for next year's banquet which will be the Illinois Family Institute's 25th anniversary. Please look at their website to see the variety of issues they are confronting including many enlightening videos and calls for action.  More information at IllinoisFamily.org.