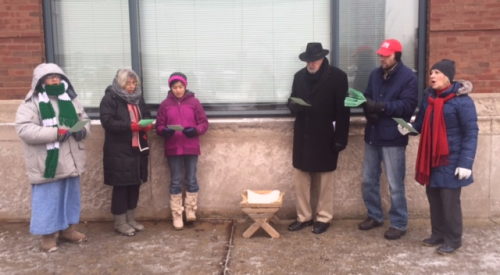 Last Saturday, pro-life activists met to sing Christmas carols at a number of Chicago area abortion clinics. The event was promoted on Facebook as "Peace in the Womb Christmas Caroling Day."  It was sponsored by the Pro-Life Action League with this also being called the "Empty Manger."  The group was lead by the league's president and founder Joe Scheidler.

The singing began at 9:00 a.m. at Family Planning Associates at 659 West Washington Street in the West Loop. According to their website, this clinic performs late term abortions, surgical abortions, and they offer the abortion pill.

"Peace in the Womb" caroling events took place in 66 cities in 28 states. This was the thirteenth year that the Pro-Life Action League has Christmas caroling outside of abortion clinics.  There was very little main stream media coverage of this important event. 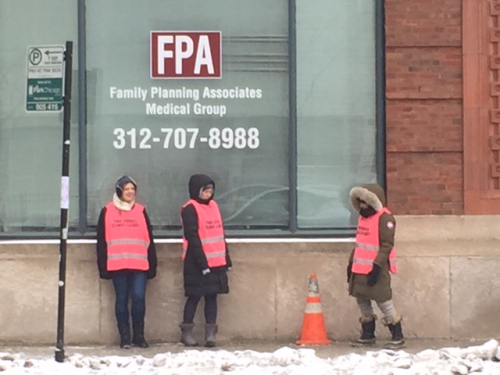 The clinic had 11 volunteers or employees out front in vests which read, "Pro Choice Clinic Escort." It was not clear if these are paid security people. Unlike other medical clinics, this one feels the need to make sure people are able to enter unobstructed. They explained the "buffer zone" to me which is a complicated state law of how many feet you are allowed to stand from the door. Sometimes pro-life advocates ask a potential patient to pray or accept some literature in the chance they may reconsider terminating the life of their unborn child. There is some irony to these so-called buffer zones. Four weeks ago I attended the Black Friday March on Michigan Avenue. Protesters formed human chains by locking arms to block store entrances from patrons therefore impeding commerce. The police stood by and made no arrests. The irony is these protesters were allowed to violate civil rights of store customers, yet a person who wishes to counsel a woman preparing to kill their baby is threatened with arrest.  The real irony is the unborn child is given no protection. I watched the peaceful group from Pro Life Action League sing a variety of songs, including "Away in the Manger," "What Child is This" and "Silent Night." Later in the day, the pro-life carolers moved to several other Chicago area abortion clinics including Planned Parenthood, American Woman's Medical Center, along with suburban locations of Access Health Center in Downers Grove, and Aanchor Health Center in Glen Ellyn.

The group describes these events on their Pro-Life Action League website:

Abortion Clinic Witness—Through prayer vigils outside abortion facilities and sidewalk counseling, we reach out to abortion-bound women and couples with abortion alternatives, confidential counseling, access to pregnancy resources and other help, and witness to the value of the lives being destroyed inside. This is the first and most important form of pro-life activism.

For more information go to prolifeaction.org We can expect the debate on abortion to certainly heat up in the new year.