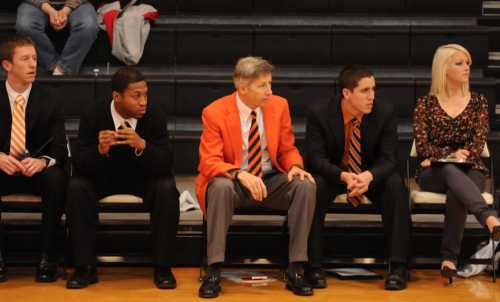 GREENVILLE – George Barber, one of four Republicans vying to succeed State Senator Kyle McCarter in Illinois' 54th Legislative District, believes his 17 years of working with area families and his community service outside of politics and campaigns may give him a leg up in the GOP 2018 primary next March.

"The fact that I am a fresh, clean name is a plus," Greenville University's head b-ball coach told Illinois Review over the weekend. "Coaching for as long as I have puts you in a public position different from politics, and that's a good thing these days. People are fed up with insiders."

Barber gained notoriety in southern Illinois and nationwide with his basketball coaching skills. Greenville led the nation Division II last season with an average of 133 points per game. Barber was featured in a Newsweek story earlier this year acclaiming Barber's unique approach to basketball.

In addition to coaching, Barber, who holds a PhD in kinetics, teaches in Greenville's Department of Health, Physical and Sport Management.

The key issues 53 year old Barber is focused on in his bid for the 54th District is balancing Illinois' budget, reforming the state's pension plan and improving the state's education system. He holds tight to the Republican Party platform's views on social issues.

Barber says if he succeeds McCarter, he will not participate in the state's pension plan. He believes the state should cut spending rather than raise taxes to balance the budget.

Among other awards, Barber was honored earlier this year as one of the Most Distinguished Men of Illinois for 2017. The award was bestowed by the nonprofit organization Continuing Academic Training (CAT), which supports academic success for at-risk youth by offering customized educational services to help students, parents and educators break the cycle of failure in school.

Volunteer help is appreciated, Barber says, as it's been tough to raise funds thus far.

McCarter has not yet publicly endorsed in the race.