CHICAGO – Monday at the Chicago Tribune, Governor Bruce Rauner and State Rep. Jeanne Ives met in the only one-on-one forum the governor has agreed to leading up to the March 20th GOP gubernatorial primary.

Rauner, who has thus far refused to publicly acknowledge Ives is challenging him, may do well to check his consultants' advice. He does have to win the March 20th primary BEFORE he can take on a Democrat.

The GOP grassroots are abandoning the governor as they learn more about his challenger, and after this editorial board, Ives was deemed by many viewers as a serious opponent.

Here's what Tribune columnist John Kass had to say after the meeting: 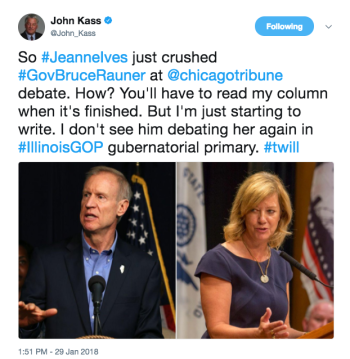 Also, the reveal of a $500,000 donation from Dick Uihlein after the board raised previously skeptical eyebrows.