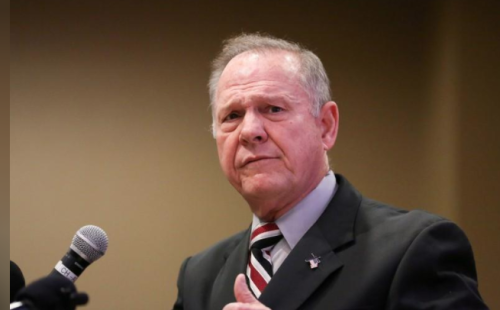 Judge Moore wasn't a natural campaigner, a particularly polished interviewee or an experienced fundraiser, but these are not necessary for a Republican to win in conservative Alabama. What Judge Moore did have is an impeccable record of Christian character, his Viet Nam military service after a West point graduation, and a history of courageous stands for conservative and constitutional issues in his state. This should have been more than enough for a landslide victory. But as revealed post-election, the major news of the campaign — the GOP subterfuge and slander — was and is still totally ignored by both the liberal and the conservative press. This was effective in suppressing the Republican turnout in Alabama in comparison with other general recent elections.

Condemnation of Moore by GOP Establishment

The GOP leadership did not hide their dislike for Moore or their involvement to destroy his candidacy. They announced openly what they were going to do in case Moore won and how they were going to keep him out of the Senate. Unprecedented in modern politics is the concerted effort of fellow Republicans to take down Judge Moore.  In the 1964 presidential election when Nelson Rockefeller, George Romney and the GOP Establishment abandoned Barry Goldwater, they didn’t stoop to planting false sexual assault charges against him but withdrew their support and let him die politically.

Alabama Senator Richard Shelby did the unthinkable working to elect a liberal, socialist, pro-abortion Democrat over a solid conservative in concert with other GOP Establishment members who were willing to jeopardize the Supreme Court and the whole Trump agenda because they didn’t like Moore’s Christianity and brand of conservatism.  Extremely disappointing was the widespread abandonment of Judge Moore by his fellow evangelical Christian leaders.  Many leaders stayed silent while others felt they had to add to the condemnation of Moore.

Rev. Albert Mohler, President of the Southern Baptist Theological Seminar and Russell Moore, president of the Ethics and Religious Liberty Commission of the Southern Baptist Convention, both outspoken and unrepentant “Never-Trumpers”, piled on with the Establishment to attacked Moore. They have done an enormous disservice to the Church by attacking Judge Moore and unknowingly have paved the way for Establishment forces to continue their strategy to defame them and other Christian leaders using dishonest charges with impunity.

Moore's lawsuit provides a useful road-map, however, of how Democrats steal elections, and how to push back and expose election fraud with statistical analysis.  In addition to implausibly high turnout in the late-reporting Jefferson County, there were 20 anomalous, late-reporting Republican-majority precincts that had results vastly different from the overall voting pattern.  There were several precincts with strangely high numbers against Moore when neighboring precincts stayed within the expected margin.  These "funky" numbers, of course, were all swept under the rug by the media and the Democrats.

Noteworthy is that none of the news reports rebutted any of the substance of Roy Moore's voter fraud lawsuit. When reporting on election fraud Fox News commentators, such as J. Christian Adams, criticized Moore's allegations without rebutting their substance.  It becomes difficult to deny that some fraud didn't occurred in the Alabama election, where the liberal candidate did 4 points better than independent polling, which is nearly unheard of.  Experts taking a detailed look at the election patterns did conclude there was fraud.

Moore's defeat represented a loss of a conservative Republican vote in the Senate and an emboldened Democratic machine planning to repeat its tricks and stunts in the upcoming midterm elections.  Moore, however, was the first candidate to fight back against real election fraud, which is more than merely a few hundred or few thousand votes that election fraud organizations spend all their time focusing on.

But it isn't only the emboldened Democrats machine that conservative will face in the upcoming midterm elections.   A week after trashing Moore's candidacy, Mitch McConnell moved on to his great nemesis, Steve Bannon, mocking him with this comment:

“The political genius [Bannon] on display throwing away a seat in the reddest state in America is hard to ignore. McConnell’s new tactic is inspired from the Joseph Goebbels school of disinformation, “Accuse the other side of that which you are guilty of.”

McConnell’s revealed by taking on Bannon that there is is now an on-going battle over who will control the future of the Republican Party.  Will it be the old GOP Establishment wing led by Rove, McConnell and Ryan or the new populist America First movement of Trump and Bannon.  In light of the recent dust-up between Bannon and Trump, where Bannon was quoted in a new book disparaging the president’s children, asserting that Donald Trump Jr. had been “treasonous” in meeting with Russians and calling Ivanka Trump “dumb as a brick,"  the new populist First movement no longer includes Bannon.

McConnell and the Republican Establishment have their political infrastructure, the House and Senate leadership, donor lists, D.C. offices, think tanks and friends in the press.  Their political vision is one of globalism and is driven by personal greed and lust for power as they plan to raise up more Establishment recruits like McCain, Flake, and Corker; hence, the Establishment has all at its disposal to succeed except what propels Trump's new populist conservative movement: THE PEOPLE.

The mid-term elections in 2018 are going to be a tough battle.   But at least statistical scrutiny of election results has begun, as a way of deterring and exposing future fraud.  More scrutiny, not less, is needed of elections or the upcoming midterms are going to be extremely disappointing.

Moore must serve as a wake-up call to conservatives. We absolutely must defend our majorities in both the House and Senate. Democrats will be on the move with all sorts of dirty and unethical tricks and the Republican Establishment will put its money and support behind status quo Republicans who will advance their policies, not Trump's

Bannon in the past has functioned as something of a mascot for Trumpism, both in terms of personality and policy. Neither Bannonism nor Trumpism ever really conformed to any strain of traditional conservatism, but they intersected with each other in important ways.

As Trump's base is made up of people with whom Trump's appeal is primarily personality-based or policy-based it isn't likely Trump's base will desert Trump, but it will continue to support Trump on the basis of his drain-the-swamp, anti-establishment attitude as long as Trump says firm in keeping his campaign promises