Janus v. AFSCME and the truth about pensions in one graphic

By Ted Dabrowski and John Klingner -

One graphic perfectly captures the absurdity of Illinois pensions over the past three decades.

Alito didn’t use the graphic below, but he could have because it makes his point.

In 1987, pension promises made to active workers and retirees in the state’s five state-run pension plans totaled just $18 billion. By 2016, they had ballooned to $208 billion.

Contrast that to the state’s budget (general fund revenues) which was up just 236 percent over the same time period. Or household incomes, which were up just 127 percent. Or inflation, up just 111 percent.

Promised pension benefits have blown past any ability of the state, the economy or taxpayers to pay for them. 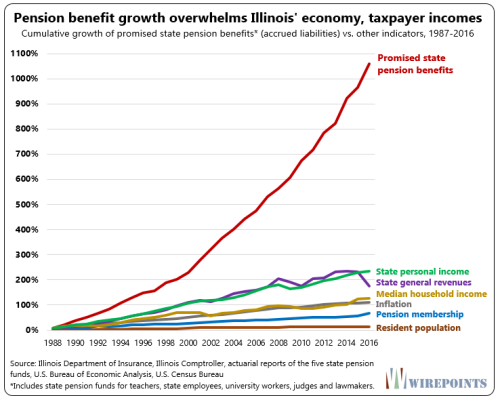 Wirepoints released a report on these booming benefits earlier this year, and while it received strong coverage online nationally, Illinois’ traditional media didn’t want to touch it. The findings interfere with the narrative that’s repeatedly promoted by public sector unions and politicians – that the crisis is all the taxpayers’ fault for failing to put in enough money towards pensions.

Overpromising is the real culprit of the pension crisis. Freezing and reversing that growth in promised benefits is the fair, and only, way to fix things.

The above graphic gives taxpayers every right to demand concessions from their public servants. The Janus ruling will hopefully give them more power to demand them.

And union members have a strong incentive to come to the bargaining table. After all, it’s their retirements that are teetering on the edge of insolvency in a state just one notch from junk status.

But If the unions won’t deal, Illinois should go ahead and freeze salaries, cut the subjects of collective bargaining, move to defined contribution plans, reduce headcounts and work with the feds on a form of state bankruptcy. With the constitution currently preventing any changes to pension benefits, those are the only levers taxpayers have to save this state from collapse.