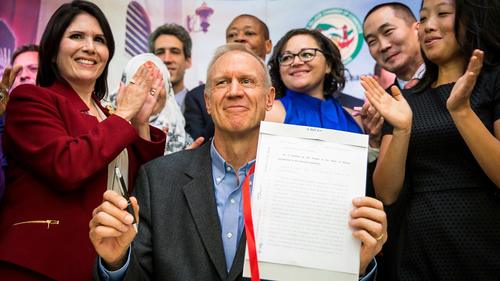 CHICAGO – Conservatives in Illinois are struggling to trust Governor Rauner and what he's saying on the stump about the TRUST Act he signed into law last year. The governor signed the legislation surrounded by immigration advocates like the Illinois Coalition for Immigrant and Refugee Rights – a pro-amnesty group – and refused to speak with family members of victims  killed by those in the US illegally.

Democrat candidate J.B. Pritzker said Thursday night he agreed with Governor Rauner signing the TRUST Act into law. Rauner said he opposes illegal immigrants that take jobs away from Illinoisans. He said he wanted E-verify in Illinois and to strengthen regulations against employers hiring illegals.

That is a shift from his previous stance, Rep. David McSweeney (R-Barrington) told Illinois Review. SB 31 restrains local law enforcement from detaining past releases dates those that do not have up to date, sufficient immigration papers – unless they are suspected of criminal acts.

Rep. Allen Skillicorn (R-East Dundee) responded saying "Then why did every sanctuary activist stand with him when he signed the Trust Act? That photo says a lot."

Skillicorn said SB31 (Trust Act) prohibits Illinois law enforcement from holding people past release dates with federal detainers, which are not criminal warrants. "Since deportation results from civil offenses, not criminal, no ‘warrants’ are issued," Skillicorn said. "Only detainers."
Don Rosenberg, who lost a son in a traffic accident in 2010 with an Honduran that entered the country illegally, told Illinois Review
Rauner's well-known position on whether Illinois is a "sanctuary state" remains confusing.
"Since there is no legal definition as what a sanctuary state is we have to look at the actions and the 'legislative intent' regardless of what they want to call it," Rosenberg said.  "Any state, city, municipality, etc. that does anything to protect those people here illegally or who have overstayed their visa is providing sanctuary from deportation.
"Rauner can say whatever he wants (plus we already know he’s a liar as he refused to meet with a group of us after promising to do so on national TV) but his 'Trust Act' is nothing more than sanctuary in illegal alien clothing,"  Rosenberg said. "That law says you’ve committed a federal immigration crime but we don’t care. We will protect you."
Conservatives statewide insist what the governor is saying now can't be believed.
"I call BS," Jeffrey Crane of Downer's Grove said. "The fact that you have to obtain a court order to detain, and as we know in the meantime they are released, makes the legislation sanctuary in status. Again, the Governor tries to smooth over his liberal proclivities, always having to explain himself. He cannot be trusted and has subsequently fired or forced out all of his conservative advisors. People aren't even talking about that.
Rauner is a rogue governor who in spite of the wishes of his supporters thinks he knows better what is good for society and Illinois, Crane said. "So now we have two Illinois dictators, Rauner and Madigan."

"Repetition is the mother of all learning," she said. "By enacting SB 31, Illinois took any discretion away from individual local governments, police departments and sheriffs to set their own policies and choose to comply with detainers or to consider immigration status as a basis for even the most temporary investigative stop.

"Merely because the bill did not also impose every other conceivable sanctuary policy doesn’t mean it didn’t make Illinois a sanctuary state: for anyone to say otherwise is simply playing word games. It begs the question: if these supporters don’t think Illinois post SB-31 is a sanctuary state, what do they think a real sanctuary state would actually look like?" Pulido asked.

On the other side, the Illinois Coalition for Immigrant and Refugee Rights said Governor Rauner's recent vetos of bills that would protect immigrants sends messages directly opposite of the one he sent last year when he signed SB 31 into law.

"Rauner’s vetoes of the bills come at a time when immigrant rights organizations are asking state and local elected officials to take leadership given the White House’s overt hostility toward immigrants," ICIRR's statement said. "The vetoes also come almost exactly a year after Gov. Rauner joined community members in Chicago to sign the landmark Illinois TRUST Act, a bill that barred state and local law enforcement from arresting and holding individuals based on immigration status or immigration warrants and detainers."

His vetoes damaged the support the immigration community showed for Rauner when he signed the TRUST Act into law, they said.

“The General Assembly passed five bills to protect immigrant communities across Illinois and make Illinois the most welcoming state in the nation,” said Fred Tsao, senior policy counsel at the Illinois Coalition for Immigrant and Refugee Rights.

“A year ago, Gov. Rauner signed the TRUST Act, yet today he announces vetoes for three bills that would make our state more welcoming. One moment he is addressing the needs of immigrant communities, and the next, he is using hateful anti-immigrant rhetoric to rationalize rejecting bills that are vital to our communities.  Can immigrants really trust this governor?”

Conservatives that are calling for a wall to be built for national security and job availability for Americans remain confused and frustrated as much as amnesty advocates are.

By Illinois ReviewIn another blow to Illinois Gov. JB...
Previous article
Pritzker provides reasons for IL conservatives to get to the polls, vote for Harold
Next article
University of Illinois defends new ‘Trumpaganda’ course