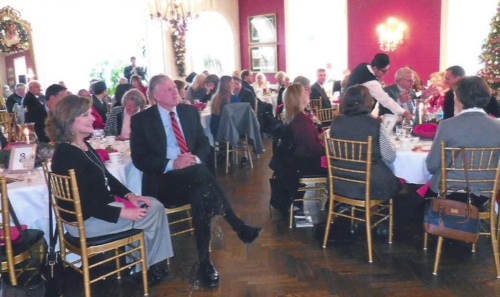 Rep. Bob Dold related how ISIS is a real threat that requires American leadership to rout and destroy. It we don't act the void will filled by someone else, perhaps Russia.  Also suggested was that the Visa waiver program must be addressed.  There are 37 countries where visas aren't required to enter the U.S. U.S. Senate candidate James Marter seconded Dold's comments about the threat ISIS poses to the U.S. He also spoke about the "unaffordable" Obamacare, where premiums are escalating sometimes up to 100%. Marter stressed that this nation must rein in spending. Money can't be spent that we don't have.

During the luncheon Jack Koenig was awarded the first Women's Republican Club "President's Award". The award was presented to Jack by Mark Shaw, GOP State Central Committeeman (10th) who recognized Jack's  his loyalty, devotion, and tenacity regarding many GOP causes.  Jack Koenig is legendary in local GOP circle for his constant volunteerism and generous service to many local GOP organizations.  In his volunteering, Jack has assisted several WRC Presidents over the years with website design, maintenance, and communications.   As Mark Shaw noted, "When the chips are down, you can always count on Jack to volunteer for the team."  Time and again Jack has jumped into the fray to fight the good fight.

Dan Proft was a GOP gubernatorial candidate in 2010, and is now the spokesman for The Illinois Opportunity Project, an editorial contributor to the Chicago Tribune, and with Amy Jacobson as a daily morning drive radio personality on AM 560 "The Answer." Additionally, Proft works as a senior fellow at the Illinois Policy Institute and serves on the Board of Directors for the Disabled Patriot Fund as well as the Advisory Board for Aid for Women.

He needed no introduction following the luncheon when introduced by President Jennifer Neubauer. His topic was "Turning Around Illinois and the Nation in 2016."  Proft, believing that what happens statewide affects people more than at the federal level, concentrated his remarks on the state of Illinois.

Of primary concern to Proft is how Illinois is $214 billion in debt, having only $30 billion in assets.  With a debt ratio of 7 to 1, this qualifies Illinois for the worst governed state in the nation.  But what can be done given Illinois' continuing budget stalemate?

Proft related how turning Illinois around is not just a one person job, as Governor Rauner is finding out.  After all, Madigan has been in the Illinois House for 40 years.  As speaker Madigan has held this position longer than any one in the history of this nation.  As for Rauner, he has been in office for less than a year and can't even get an audience!

Proft spoke on an existing problem as "The North Shore Story."  Although Wilmette, Glenview and other Northshore communities voted for Rauner in 2014, they choose to re-elect their Democrat legislators.  Some good news is that in 29 State House districts and 10 Senate districts, Rauner was victorious over Governor Quinn in 2014 after voters decided a change was needed at the gubernatorial level.

Voters now need to connect the dots and likewise vote against their Democrat state legislators.  For unless Republican candidates and leaders become more forceful with their arguments, soon the only people left in Illinois will be people too rich to be impacted by tax increases or those who depend on state handouts (welfare) to live.  Others are being squeezed out and are leaving the state.  Of concern is that the level of courage among Republicans is not what it should be.  Without courage, it doesn't matter what you believe.

Concerning Illinois' debt, it didn't happen overnight. The propensity to working together in bi-partisan cooperation over the past 40 years has run up the debt.  In the interim Republicans have lost races that they should have won.  Positive things have happened in Wisconsin because of good policy choices made.

Public sector worker pensions are paramount in the accumulation of Illinois' debt.  The pensions of public sector workers, namely those of police and firemen, were discussed.  Being able to retire at 55 with a sizable pension is unfair, considering that the average salary in the private sector is $52,000.  Then too, in just 2 years retirees receive back in pension payments what they paid into their pension fund.

Consider Governor Quinn.  He paid $200,000 into the pension system and will likely receive $3 million back in pension payments by the time of his death. That's quite a remarkable return on Quinn's investment when the state is $214 billion in debt.  The $30 billion garnered from the last tax increase went for pensions, doing nothing to rescue Illinois from its financial Armageddon.

People are counting on their government pensions to live after retirement, but what if the pension system goes under and are defaulted.  For most individuals there is no Plan B.  It is therefore essential that something be done in order for people to enjoy the benefits they earned and are entitled to receive.

This is the challenge of 2016, which even the Republican Party has failed to show the urgency needed to solve the problem.

The following four questions were addressed by Dan Proft:

Question: Has time run out to fix Illinois?  Is the state of Illinois like a snowball rolling that can't be stopped?

Response: The pension problem is a big factor that requires attention.  University professors already have a pension plan similar to a 401 (k) that is working, which could be applied to other public sector workers. Then too is the problem of Medicaid expansion under the Affordable Care Act (Obamacare).  By 2017  Medicaid will cost the state of Illinois $2 billion.  The more Medicaid is expanded as part of a political agenda, the less money there will be to help those for whom the program is intended to help.  But there is some good news:  The problem didn't arrive in a spaceship.  We did it to ourselves.  Proft doesn't believe that we are yet at the "Sky is Falling" stage and that it's all over.  Republicans must win elections.

Question: How can voter fraud be prevented?

Response: Proft believes that the Democrat Machine is weaker than it has been for a century and that voter fraud isn't as easy as it once was to commit. Furthermore, Chicago is becoming less populated as many blacks are moving to the south.  Since the incorporation of Illinois in 1810, Republicans have won elections following the Party's founding on March 20, 1854. Abraham Lincoln was the first Republican U.S. President (1861-1865).  Although Michael Madigan is smart and works hard to keep Democrats in power, those in the Republican Party must do the same. Trained election judges are a must to prevent fraud, but it's not the most important issue that Republicans should be concerned about.  Republican should take advantage of informing the pubic about all the outrageous Democrats have done.

Question: Is the state about to go bankrupt?

Response: A state cannot declare bankruptcy, but it would take but one bankruptcy judge to open the floodgates and declare the pensions owed government workers are not technically units of the state.  Local units of government can file for bankruptcy.  But happy news was presented with all the grim news.  Whoever the Republican candidate might be, he/she will run against Hillary.  The Trump phenomena was discussed.  Half of all Republicans without a college degree are for Trump.  Candidate Cruz was touted as using the base-plus strategy (turn out the base, plus increasing the Latino vote from 27% to 36%).  Whoever can take the message that people are looking for in this cycle will win:  "All elites in the media and academia are even worse than you think they are."  This candidate will as such stand outside the ruling class by declaring a pox on both house.  Proft does believe that what Trump has done is instructional.  He has brought people together that have real concerns about the quality of life and supply answers.  Trump was compared to a Roshak ink blob.  The 2016 election must be a referendum on the 8 years of Obama and Hillary.  Encouraging to Proft is that candidates Marco Rubio, Ted Cruz and Donald Trump never go on the defense.

Question: How to improve the economic conditions in Chicago?

Response:   Proft's response was to list the obstacles that are in the way.  1)  Worker's Comp is prohibitive.  Locating business in Chicago is crazy.  2)  Trial lawyers impede positive action.  3)  Regulatory agencies with their mandated requirement are restricting.  4)  Chicago has the highest property taxes of any other city in this nation.  5)  Look to see what other states are doing.

"There is a need to eliminate Rahm Republicans.  It makes no sense to believe that Rahm is the best we could do.  Dealing with Illinois must come first.   Rahm, in receiving support from the corporate financial set, is crowding out money for other candidates.

"We must stop treating our enemies like friends.  Politics is not about friends but about interests.  Policies must be advanced independently.  The language of appeasement must be stopped."

Those attending the event included:

The Women's Republican Club, which was founded in 1941, is the longest continually operating political group in Lake Forest-Lake Bluff.  Membership is open to both men and women as well as GOP local, state, or federal candidates or office holders.  Residence in Lake Forest or Lake Bluff is not required.  WRC exists to assist GOP candidates and educate voters on issues of importance.  www.womensrepublicanclub.com