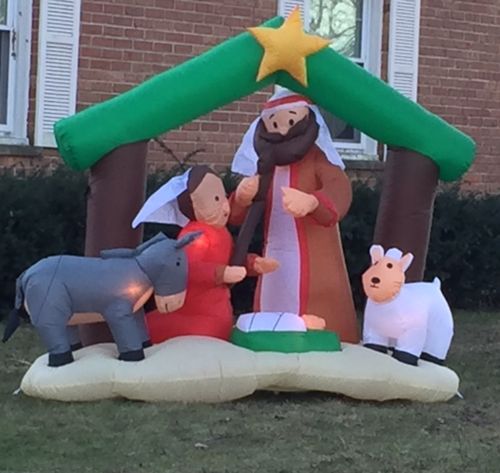 I love the Christmas season especially the Christmas decorations and lawn displays. Last year, I started a social media project of posting a different nativity scene a day on Facebook during the holiday season. This year I got a little more carried away posting plastic mangers, air-blown manger scenes, mini-mantle mangers. There was even one of a church service with live animals reenacting the birth of Jesus Christ.

The service at the Trinity United Methodist Church of Wilmette included a live donkey, five sheep and an 1800 pound camel. All the animals were brought through the middle of the church as the children's pageant was presented. I didn't quite manage a selfie with the enormous camel (which by the way did not smell too good). Somebody else snapped a picture of me which appears to show me interviewing the huge two humped creature. The live nativity service included a beautiful baby Jesus with some hip looking parents, that is Joseph and Mary. It's hard for me to write something without some politics involved. This has been the year of political correctness especially in discussing the meaning of Christmas. This is also the year of the 50th anniversary of the Charles Schultz classic, "A Charlie Brown Christmas."

This classic animated show has been shown on TV and adapted for school plays over the past 50 years. It debuted on ABC-TV IN 1965. This past week, a Kentucky school district had all religious references removed from the play – including the song "Silent Night." This is outrageous, as the whole story is about Christianity.

The story revolves around a troubled Charlie Brown depressed during the holidays searching for the real meaning of Christmas. He is mocked and made fun of as he expressed concern about the over- commercialization and secularism of Christmas, which should be celebrated as the birth of Jesus Christ.

The high point of the movie has Linus dropping  his blanket in what is referred by some as the "Fear Not" speech. It is a big turning point, because throughout the cartoon series, Linus is always holding his security blanket. He recites the Christmas story from the King James version of the Bible.

Luke 2:10: "And the angel said unto them, Fear not: for, behold, I bring you good tidings of great joy, which shall be to all people."

Here is the clip from YouTube. Watch when Linus drops his blanket:

I managed to find over 100 various nativity scenes, below are several of my favorites. I wish I had enough room to show them all. Maybe next year I'll do a coffee table book.

Another topic of discussion this holiday season is favorite holiday movies.  The Hallmark Channel is showing sappy Christmas stories 24/7 for the whole month which by the way, I'm watching them all. The other networks are of course showing the classics. One of my favorite movies is "It's a Wonderful Life" while my least favorites might be "Jingle all the Way" with Arnold Schwarznager followed by "Bad Santa" with Billy Bob Thornton.

Some might look back on 2015 as the "Star Wars" Christmas. The seventh film in the series was released this week breaking all box office records. You may have noticed all the stores have massive amounts of Star Wars merchandise especially holiday decorations. You may spot a R2D2 air blown Santa in a yard, a C3PO elf, or even a Darth Vader ornament. Personally for me, while I enjoyed the movie, Star Wars is not the meaning of Christmas.

Perhaps my all-time favorite is an eight minute short animated film produced in 1936. It's the story of  a junk man who dresses as Santa to save Christmas for kids in an orphanage. It's called "Christmas  comes  just one a year."

As we all know, politics will be looming large in 2016. For the remainder of 2015, though, I am choosing to fully embrace the spirit of Christmas by spending time with family, friends, and the community.

I would like to wish everybody Happy Holidays, Merry Christmas, and a Happy New Year. Looking forward  to 2016. By Illinois ReviewBack in 2017, when Republican National Committee...
Previous article
Rhoads: Push Back, Say Merry Christmas!
Next article
Starkehaus: The reason for the season…Merry Christmas