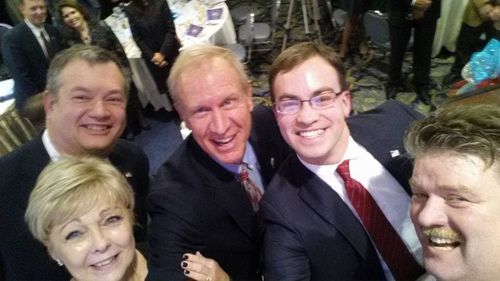 The Downers Grove Republican Organization held their annual Reagan Day Dinner 2015  this past Tuesday at the Ashyana Banquet Hall. It was a sold out room with about 700 loyal Republicans in attendance. 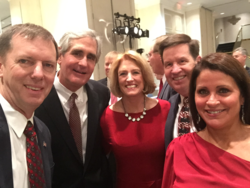 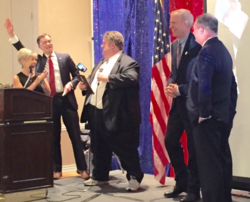 Rauner gave an uplifting speech talking about his "turnaround agenda" which he says will get the finances back in shape in Illinois. His priorities are education, helping the disabled, and stemming increased taxes.

The governor was presented two gifts after his remarks. The first was being appointed an honorary committeeman position (number 145) in the Township organization. The inside joke was there are only 144 precincts as the honorary position.

The second gift was a selfie stick which was immediately used to take a SELFIE of the group on stage which included In the picture are left to right: DGTRO Treasurer Lorraine Grimsby, Chairman Brian Krajewski, Governor Bruce Rauner, Vice Chairman David Olsen , Finance Committee Chairman Greg Boltz.  (Somehow I managed to get in the photo seen in the top left corner next to Lieutenant Governor Evelyn Sanguinetti.) There was much talk about the upcoming presidential primary in Illinois on March 15, 2015. The lobby was full of volunteers getting signatures to get their candidate on the presidential ballot. In general, Republicans seen optimistic with an economic turnaround under Governor Rauner along with many more Republicans elected in the next cycle. I think my personal favorite president Ronald Reagan would be proud.