Thorner: Are America’s greatest days yet to come? 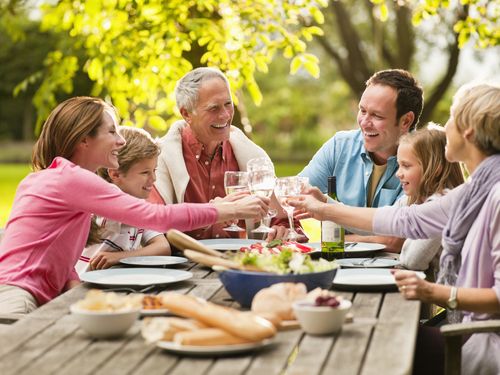 While the vast majority of Americans say that their nation's not headed in a good direction, there's a minority that are optimistic about the future. Indeed, author Michael Lotus believes America's greatest days are yet to come.

Mr. Lotus draws his optimistic attitude by reaching back into this nation's history. Although a young nation, America has survived other dark periods and has emerged stronger for them. Examples stem from the Civil War and this nation's confrontation with the 3rd Reich (Nazi regime in Germany). After these two momentous events in the life of this nation, the economy buzzed, Americans thrived as a people, and great advances were made.

Paramount in sustaining Lotus' hope is a cultural formula that has remained consistent over many centuries.  This cultural foundation is technically termed the "Absolute Nuclear Family.” Lotus explained that this nation has an individualistic society, with the weakest extended family of any country in the world, making her unlike any other nation in the world. For example: In Arab-Muslim countries, traditionally the young don't pick their own spouses. Theirs is an extremely clan-like family network.

That important concept was just one introduced Saturday morning, January 9, to the Women's Republican Club of Lake Forest-Lake Bluff — now it its 75th year since its founding. Club member Hillary Till introduced Lotus, her former classmate at the University of Chicago. Lotus is the co-author with James C. Bennett of America 3.0, Rebooting American Prosperity in the 21st Century–Why American's Greatest Days Are Yet to Come.  The book has been endorsed or favorably reviewed by many, including National Review Editors-at-Large Jonah Goldberg and John O'Sullivan; Michael Barone, Senior Political Analyst for the Washington Examiner; “Instapundit” Glenn Reynolds; and hailed as an "intellectually ambitious and accessible work" by The Washington Times.

America 3.0: has two sub-title: "Rebooting American Prosperity in the 21st Century and "Why America's Greatest Days Are Yet to Come." Mr. Lotus prefers the latter sub-title, believing that America's greatest days are yet to come despite this nation's high unemployment level, the existing low trust by the American people for established institutions, and how senior citizens have been impacted negatively because of low interest rates, etc.

Reasons to be Positive

English-speaking people have created wealth and innovation based on their practice of finding the most talented people they can find to build something, such as when starting a business, rather than relying on relatives.  At the same time it is not a utopia, and complaints that America can be a cold or lonesome society have some basis in fact.

This nation has the ability to assimilate people unlike anywhere else in the world.  As such we shouldn't panic at allowing a certain number of immigrants to come to America.

(The author took exception with Mr. Lotus on immigration. Lotus never clarified specifically whether he was speaking about illegal immigrants, those of refugee status, or those who wait for years to enter this nation legally.)

America 1.0 was described by Mr. Lotus as the society of our Founding Fathers, one of small scale, local government and based on agriculture.  People were free but poor.  It was based on muscle power, since machine power had not been invented.

The transition to an America 2.0 first began to be visible in the Northeast before the Civil War. The introduction of steam power began to change the entire economy and society. It was the Civil War, particularly the mobilization of men, war material, and money required that created the initial outline of America 2.0.  It was those of the Civil War generation (those who weren't killed) who are credited as the true founders of 2.0.  The change was not without pain, as big cities grew and politics became corrupted.  Just as now, it was perceived by the American people that our nation’s Constitution had been undermined, and that America’s best days were behind her.  But America got through that transition successfully.

The railroads enabled people and goods to move more freely.  Factories sprung up and required lots of people doing things in a systematic way in order to achieve huge returns.  The automobile replaced the horse and carriage. With the development of transportation suburbs were built, offering the American people a quality of life which only the wealthy had enjoyed before.

From its onset America 2.0 required some centralization.  More rules and regulations were needed for the huge influx of people from farms into cities.  Change led to the development of a progressive political movement which took several generations to affect change.  The political framework for America 2.0 happened with the election of FDR and his “Great Society.”  Social Security came into being which led the American people to believe that government would take care of their retirement years.

In retrospect, mid-20th century America looks like a Golden Age.  Big Business thrived. WWII was won and prosperity returned to this nation.  The building of suburbs exploded where families could have their own homes and yards.  Our grandparents, and the World War II generation, built the America we grew up in, which was a very great country in its day.

Another important achievement of 2.0 were technological advances such as the Internet, which allows instant communication, and can be considered the beginning of America 3.0.

The transition from 2.0 to 3.0 is already underway.   The big government of today will eventually have to fail, for unable to keep its obligations, default is inevitable.  The American people will experience pain as the government sector shrinks, but hopefully the cuts demanded will be made as as painlessly as possible.  Mr. Lotus called for an open and transparent reduction of government, which he called “The Big Haircut.”

We can only speculate what America 3.0 will bring. Lotus suggested the following things as likely:

As changes come and are integrated into society, the cost of living will go down.

As with electronic devices whose technology is increasing at a rapid pace, to be fully accepted requires a generation who grew up with it and take it for granted before it become universal.

Although bad things will continue to happen during the transitional period, Mr. Lotus fervently believes that only when the situation becomes bad or oppressive enough will enough people rise up to demand change.  This seems to be happening now, as millions of Americans are saving NO to establishment presidential candidates from either party in favor of candidates who are considered outsiders. The change from 2.0 to 3.0 must allow the creative powers of the American people to be realized and developed, despite a government machine that doesn’t want this to happen.  It doesn’t help that we live in a “creepy state” where government has the capacity to spy on us.  It will require political will to rein in this threat and subject it to lawful control.

The conservative inclination is to go back to something considered more pleasing, perhaps to the 1950's?  Some conservative even try to romanticize America 1.0, but you can never go “back” to anything. Both political parties have become corrupted. It will take personal moral courage to fix something as bad as it is now.

George Washington and the Founding Father were willing to roll the dice and make change happen.  The signers of the Declaration of Independence risked their lives knowing they could be hung as traitors.

Like those who risked death in Colonial America, as America 3.0 struggles to be born, activists and concerned citizens must take the lead, even if the personal risk is not so great. If they don’t others will do so in their absence, and the America of the future will not be as good as it should be and can be.  The conditions are in place for change, given the excesses and the flaunting of our Constitution by our government and by cronies who benefit from it.  We must be ready to seize the day.

By Illinois ReviewLocal Illinois Republican leaders from the 82nd...
Previous article
Starkehaus: The State of the Union, such as it is
Next article
LaHood endorses in 11th CD GOP primary