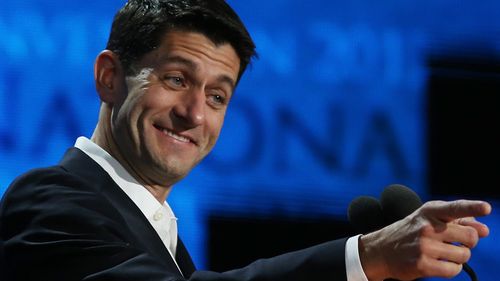 New Speaker of the House Paul Ryan has been quite busy theorizing lately. Viewed as the intellectual type by the Beltway pundits, Ryan gave the world his hypothesis for recent conservative failures when he stated: “My theory of the case is this: We win when we have an ideas contest. We lose when we have a personality contest.”

I don’t know about that, Ronald Reagan had a pretty nice personality. Even so, tell that to the blue collar worker in the Rust Belt who lost his job to the de-industrialization caused by “ideas” that he and his fellow travelers have given us the last 40 years. Paul Ryan, an ideas guy he is. But how conservative is Paul Ryan really? He’s pro-life and pro-gun and I’m sure he’d like lower taxes. But beyond that I sure don’t see it.

Consider that Paul Ryan spent quality time discussing the merits of open borders in Chicago with Congressman Luis Gutierrez who just happens to be the poster boy for the movement. And Ryan was not just making happy talk, he has consistently pushed in Congress for various measures to increase green cards and expedite the movement of more cheap labor in to the country for big business.

Is this any different than Obama’s view on the issue? And how will that help the struggling middle class in this country? By depressing their wages? Isn’t that what really creates those jobs that Americans supposedly don’t want? How is any of this conservative?

Ryan is also a strong supporter of free trade agreements. This appears to be the case even if his own district is negatively affected as it was recently when General Electric announced another round of outsourced jobs from its Waukesha, WI facility.  Talk about being an ideas guy! I wonder how his district residents feel about those “ideas” though? Maybe he can bring to his next townhall meeting those big fancy charts showing the negative effects of deadweight loss on society. I wonder though how those who lost their jobs will feel when he shows them their livelihoods have been reduced to a few shaded areas on a supply-demand graph?

But let’s give the Speaker due credit. At least Mr. Ryan admitted recently that he is willing to lose his seat in 2018 if he can get the right things done to save the country (my hope is he loses his seat in 2016, but that is probably wishful thinking). But what an ego that viewpoint entails! In other words, he can impose his objectivist philosophy if Republicans control a majority in Congress along with the White House. Then he is willing to be forcibly retired with a nice fat Congressional pension and I’m sure an even fatter lobbyist gig while the rest of us deal with the deflationary effects of full-throated supply-sided economics.

Let’s remember that Ryan was also a backer of the Trade Promotion Authority bill last summer which gave President Obama the ability to negotiate the Trans Pacific Partnership (TPP) deal with Asian countries and then present it to Congress for an up or down vote without amendment.  The final passage of the TPP hasn’t occurred yet but there are rumors it is so unpopular and controversial that it will be done in the lameduck session after the November election. Ryan feels that engaging Asia on this deal will allow the United States to take the lead on writing the rules of trade. Somehow this will strengthen our country’s position in the world in the 21st century. But isn’t that the sort of thing that was said about NAFTA, CAFTA, and GATT too? Twenty years of de-industrialization later we all know how those trade deals turned out.

The Republican party in general that has zero credibility on this issue. Free trade in a global world as we live has led to economic decline for the middle class in America. Wages in some industries and sectors of the economy have stagnated since the 1970s. This happens to coincide with the era of huge trade deficits and these wonderful free trade deals. I suppose the elite shareholders of our country though got some bigger dividends, which they probably invested in other businesses in the service sector which created those low wage jobs we keep hearing about.

But wait, there is even more that the middle class must swallow in the name of principle and Paul Ryan’s college textbooks. How about a spoonful of entitlement reform? That just means cutting Social Security. Now considering the federal government got the benefit of the time value of the retirees’ money these last eighty years, I don’t think reducing the benefits whether through actual cuts or delaying retirement or other gimmicks is going to help middle class families much. Nor do I think allowing the export of American oil to world markets will help out much either. This will inevitably lead to higher gas prices at some point down the road.

So, Who is Paul Ryan? He seems to be a true believer of 18th century classically liberal ideas. This doesn’t make him a conservative as what exactly is it that full implementation of those ideas is going to conserve? Yet he seems to think that the ideas of men who lived centuries ago is going to appeal to a Republican electorate that sees its country disintegrating.

Sorry Paul, that’s just not who we are.