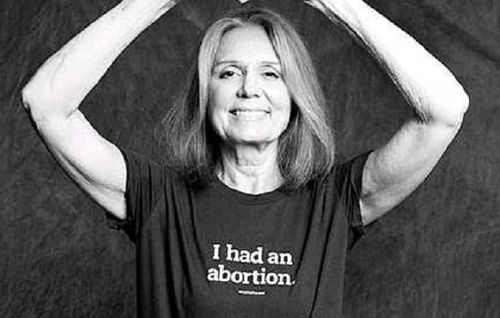 Lands' End has been using the year of 2016 to honor several legendary women who, in the company's opinion, changed the course of modern history through their activism. The company chose to celebrate activist women by interviewing and profiling them within their clothing catalogs over consecutive months.

Land's End highlighted Steinem as one of its "Legends," individuals who have made a difference in both their respective industries and the world at large and have paved the way for others to follow.

For every buyer who orders an ERA Coalition logo monogram on one of its items, Land's End will donate $3 to the coalition's Fund for Women's Equality, Inc., according to the website. The campaign – "in honor of Gloria's work" – is running now through Jan. 31, 2017, the website states.

"Why would they do that?" you may be wondering. This is a very good question to ask, I think.

We can assume because they are highlighting Steinem's work that the company believes Steinem's changes had a positive impact on society and womankind as a collective; that we should emulate her and maybe dress like her too. We can assume Lands' End believes they are just the right kind of outfitter to put together your Steinem ensemble.

We can also assume we won't be seeing Squeaky Fromme, for instance, listed as one of the honorees…although she too changed the course of modern history and in much the same way.

They thought maybe that Steinem's brand of feminism vs. the Fromme style was what consumers wanted to see in their catalog.

"Which wizard of smart thought that would be a good idea? Why would they do that?" This is an excerpt of a conversation that I had with an acquaintance – one of Lands' End's regular customers who, better than the company itself could, immediately saw the fiduciary constipation created by funneling money into rabid pro-abort activism. This acquaintance instantly recognized that endorsing Steinem in this way traveled beyond bad taste and into conflict of interest.

Here's the conflict that I'm not sure even LifeNews picked up on when it characterized Lands' End as a popular women's clothing retailer. And don't get me wrong. They do sell women's clothing.

They are also one of the nation's largest vendors of parochial school uniforms.

…which might explain why on February 24, 2016, Lands' End publicly apologized for promoting Gloria Steinem and through Steinem's persona, inadvertently promoted her "I had an abortion" campaign.

What is the first rule when considering ad campaigns. Rule #1 – Will this tick off my core customers?

Capitalism and consumerism in their humblest forms are very natural, very functional human activities that solve the problems of supply and demand simply and directly. It's all very linear. "I need school uniforms. They sell school uniforms. I will buy my school uniforms from them."

Progressivists love to recount the evils of capitalism. They take great pains to tell anyone who will listen how capitalism begets corruption. Ironically, the problems with capitalism usually start when progressives see a cash cow and wonder how they might milk it for their own social engineering schemes.

It's not quite as direct as supply and demand. There's always more to it. "I want to fundamentally change the country. They sell uniforms. I will get them to fund my changes and I will rule the world. And I shall be beautiful and terrible as the Morning and the Night! Fair as the Sea and the Sun and the Snow upon the Mountain! Dreadful as the Storm and the Lightning! Stronger than the foundations of the earth. All shall love me and despair. Wa-haaa-haaa-haaa!"

But that style of supply chain management only works for as long as the consumer either embraces where a company directs its cash or values a particular product more than her own ideologies. We see this all of the time with companies that overtly direct funds into campaigns which work against conservative values and interests.

And that's just abortion. But what's more important? A human life or a comfortable running shoe? We can't let a little amniotic fluid get between us and our Cherry Garcia, I guess.

So just consider the companies that work to fundamentally change the culture in ways besides abortion. This from NY Daily News:

Chobani founder and CEO Hamdi Ulukaya says he will join some of the world's richest individuals in pledging to give away at least half his wealth, which has been estimated at $1.41 billion.

The Turkish-born yogurt entrepreneur is making the commitment as part of The Giving Pledge, which was created by Berkshire Hathaway CEO Warren Buffett and Microsoft founder Bill Gates. The effort asks billionaires to commit to giving away more than half their wealth during their lifetimes or in their wills.

Giving away his wealth? That sounds like a very noble cause to me. What could be wrong with that?

Maybe the wiser question we should be asking is, "Why would he do that?" Quoting from the same article:

Since its founding in 2007, Chobani has helped drive the surging popularity of Greek yogurt, which is thicker and has more protein than traditional supermarket yogurt. More recently, however, it has been facing tougher competition from bigger companies like General Mills, which has been more aggressively pushing Greek varieties of its Yoplait yogurt.

Perhaps it's a coincidence that after pledging to give up half of his wealth, Chobani was – per Syracuse, NY local news – fast tracked by USDA to provide Greek yogurt to schools in seven states as a part of the Obama Administration's push for a protein alternative to meat.

We should care because Hamdi Ulukaya is pledging to give half of his money…to what? According to WND.com:

Ever wonder why the federal government would be sending hundreds of foreign refugees to a relatively small town in Idaho? Wonder no more. They're sent there, many of them, to work in the world's largest yogurt factory.

The U.S. State Department has shipped more than 11,000 refugees directly from the Third World to Idaho since the Sept. 11, 2001, terrorist attacks. Just in the past year, 989 refugees have arrived in the rural state, most of them landing in either Boise or Twin Falls.

– and to top that off, this is according to ABC News:

McDonald's is partnering with Greek yogurt maker Chobani for its parfaits and smoothies in Southern California as the fast-food chain tries to transform into a "modern, progressive burger company."

Chobani is about to become the definitive Greek yogurt for school children and their drive thru moms throughout the land. Every time you drive through to get your daily dollar diet; you can rest easy knowing you are helping Syrian refugees get jobs in Boise.

Seriously, there will be well funded, international studies on the superior health benefits of Greek yogurt over all other yogurts, and how it will help to prevent cancer in lab rats, regrow hair in balding men and lower the rising sea levels. Chobani will be the focal point of no-meat-Mondays throughout academia. All the hippest, coolest TV shows will feature their starlets sporting "Feel the Bern" tee shirts while consuming Chobani. Watch the magic.

Meanwhile, conservative consumers who have been the champions of free market capitalism will become surrogate supporters of Syrian refugees just as they've been proxy abortionists in pursuit of their half-caf-frappes.

It won't matter how they vote in the upcoming presidential elections; conservative consumers will inadvertently negate their own candidates' mandates through their purchasing choices.

The answer to the question "why did they do that" is that conservative consumers identify a high quality product, purchase it and remain loyal to the brand even when the brand works against their own political interests. Progressive consumers identify a high quality product, apply political pressure until the company proves its loyalty to them and become riotous when the company does something that works against their political interests.