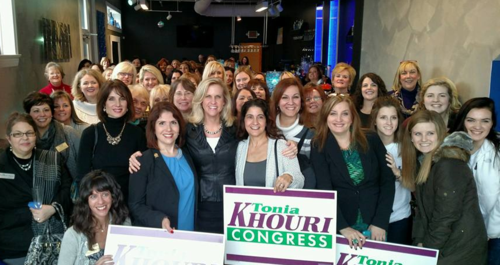 "Tonia's business savvy makes her the right candidate to lead the 11th Congressional District in Washington, D.C.," said Sanguinetti. "As an elected official, Tonia has fought tirelessly to maintain a business-friendly environment by opposing tax hikes in DuPage County and will be that same warrior for the 11th District when she's elected to Congress."

Khouri, who serves as DuPage County Board's Chairman of Economic Development,welcomed Sanguinetti's support. Sanguinetti served on the Wheaton City Council before being elected with Governor Bruce Rauner in 2014.

"Lt. Governor Sanguinetti knows we need a pro-growth Representative from the 11th District that will fight for our communities and small businesses, and I will do just that," said Khouri. "I'm grateful for her support and I look forward to taking that same passion with me to Washington when I am elected in November."

Khouri has also been endorsed by several D.C. women's groups, including VIEW PAC and Maggie's List in December. She was recognized as "On the Radar" by the National Republican Congressional Committee's Young Guns program in November.

Khouri has to win over competitors in the March 15th GOP primary Dr. Nick Stella and Herman White.