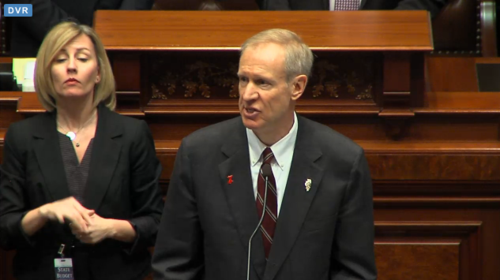 SPRINGFIELD — In response to Governor Rauner's budget address Wednesday, organizations from throughout the state offered the following comments:

Today Governor Rauner demonstrated that he understands what is needed to fix Illinois' long-term challenges. He identified this path when saying, 'the true solution to fixing our budget is to raise revenue by expanding our tax base and growing our economy by not raising taxes…

Unfortunately the leadership in the General Assembly has continually resisted real reform and advocates for the same old path of inefficient government and out-of-balance budgets that will necessitate higher taxes on Illinois families and businesses. Governor Rauner's plan to reform government and grow the economy is the right path to lead our state to sustained prosperity.

Governor Rauner's budget proposal is  bold attempt to tackle the state's fiscal problems. For too long legislators and legislative leaders have ignored problems that are destroying the foundations of Illinois' job economy. There is NO middle class opportunity without jobs. Getting the state of Illinois' fiscal house in order is critical to attracting and keeping manufacturing jobs. The governor's budget plan starts us back down the path to fiscal sanity. The members of TMA strong support the governor's budget plan, his call for bending the spending curve by enacting structural reforms and his efforts to address job growth."

We applaud Governor Bruce Rauner for offering two clear and comprehensive paths for balancing the state's budget and ensuring the long-term growth of the Illinois economy.  Simply raising taxes is not the answer to create a sustainable and bright future for Illinois families and businesses. Illinois needs major structural and transformational changes to improve the economy, create jobs, and generate precious revenue for state coffers so that we can fund important programs like education and infrastructure.

We appreciate the Governor for shining the spotlight on the budget and pension debt and call on all elected officials on both sides of the aisle to work together and make the tough decisions needed to put our state on sound financial footing again.

IRMA applauds Governor Rauner's evaluation of the current status of Illinois' fiscal and economic situation and the challenges we all face. No one believes raising taxes alone, or cutting alone, will address the problems confronting Illinois. However, retailers across Illinois are operating on razor thin margins, and we cannot afford additional regulations or mandates on the city or state level that inhibit our ability to survive, let alone grow.

As it always has, IRMA stands ready to work with all parties on crafting an agreement that will stabilize Illinois' fiscal situation and move Illinois forward economically for years to come.