Congress Plans Fight on Illegal Diversion of $3.5 Billion to Insurers 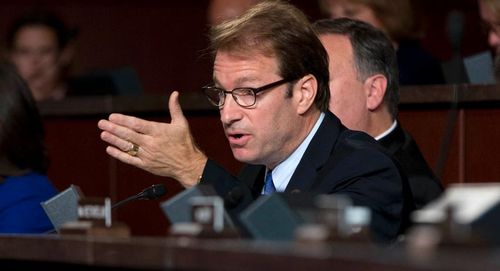 WASHINGTON – The fight over whether the Obama administration broke the law by prioritizing insurers over billions of dollars in payments to the U.S. Treasury through a program implemented under Obamacare is only beginning.

Following the release of a memo from the Congressional Research Service last week, Republicans on the House Energy and Commerce Committee pressed Health and Human Services Secretary Sylvia Mathews Burwell on the $3.5 billion illegally diverted to insurance companies under Obamacare’s transitional reinsurance program. The nonpartisan agency said that the administration violated the Affordable Care Act’s language in prioritizing insurers over the Treasury.

Now, Republicans in both the House and the Senate say they plan to continue pressing the Obama administration on its decision to redirect the money.

“HHS should remember that breaking the law with regards to Obamacare is why the House sued them in the first place,” David Pasch, spokesman for Rep. Peter Roskam, R-Ill., told The Daily Signal.

Pasch was referring to a lawsuit the House of Representatives filed against the Obama administration in 2014. The lawsuit challenges the legality of the health care law’s cost-sharing subsidies, which the House argued were funded without an appropriation from the lower chamber.

“In some circumstances, Congress delegates discretion to agencies to implement laws,” they wrote. “However, when Congress withholds discretion, as was the case here, agencies are bound to carry out the law as written or seek assistance of Congress to change it.”

Pasch told The Daily Signal that Roskam and the Ways and Means Oversight Subcommittee will “consider all remedies available to ensure the administration follows the law” and plans to hold hearings and introduce legislation addressing the redirection of $3.5 billion to insurers.

Thus far, Republicans in the House have taken the lead on looking into Obamacare’s reinsurance program. But the Senate isn’t planning to stand idly by.

Read the rest of the story on Heritage Foundation's Daily Signal.