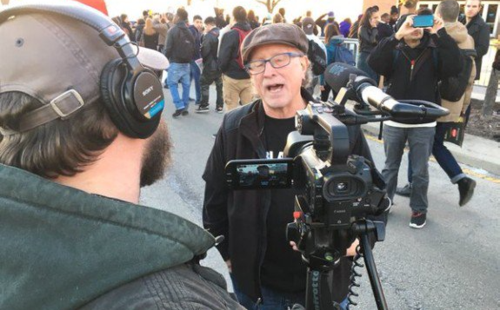 Businessman Trump was about to take the stage before a crowd of over 10,000 – with thousands reportedly outside, unable to get into the University of Illinois -Chicago Pavillion when the event was canceled. Hundreds of those inside the arena turned out to be Trump protesters, determined to shut down Trump's speech.

When the protesters and Trump supporter confrontations inside and outside of the event grew out of control, Trump told Fox News Sean Hannity Friday night his Secret Service detail and the Chicago Police counseled him to cancel the event, and he agreed.

Bill Ayers, who never spent time in jail for the anti-police violence the Weathermen Underground perpetrated during the 1960s,  took to Twitter, saying, "We shut Trump down! Beautiful gathering of anti racist youth"

Ayers re-tweeted calls for help for those arrested by Chicago police and boasts of stopping the Trump rally: