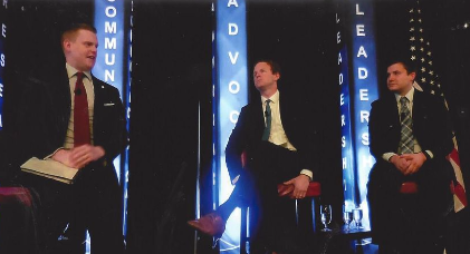 Heritage's 11th stop in its nationwide tour to "Reclaim America" took place in Chicago on Tuesday, March 8, at the Inter-Continental Chicago, 505 North Michigan Avenue, Chicago, and attracted Heritage supporters and friends. Featured was a 4:30 p.m. panel discussion, followed by the 6:00 p.m. main event after a short break. These four strategies were cited as the way to "Reclaim America through restoring America's Timeless Foundation."

Paul Winfree was introduced by McIndoe as an economist and leading voice in Washington for free markets and fiscal responsibility.  Paul is also director of the Thomas A. Roe Institute for Economic Policy Studies at The Heritage Foundation, as well as the think tank’s inaugural Richard F. Aster fellow.

Winfree noted how tax reform is shaping up to be a big issue this fall.  Every Republican presidential candidate is talking about tax reform proposals in one form or another, unlike Democrats who are  recycling policies that received top priority in President Obama's budgets during the past eight years. In that a page of new regulations is added every day to the tax code, there is an urgency for Republican candidates to be updated with their message presentations.

Two major tax code problems were highlighted by Mr. Winfree:   1)  Fairness, relating to the horizontal inequity issue, so what one invests in and how an individual spends his own money is not the same across  board, and 2) Complexity, which gives rise to $5 – $6 billion in lost investments every year.   Americans spend 6 billion hours complying with the tax code. This leads to tax enforcement, of which tax avoidance is paramount.

Mr. Winfree further suggested that tax reform will have to wait until another administration, hopefully a Republican one.  Furthermore, spending must be taken into consideration when talking about tax reform, as the power to tax is linked to the power to spend.  Spending, as mandated by our Constitution, is threefold:  paying our debt, funding the military, and providing for the general welfare.

Mr. Yaworske's initial comments outlined last year's tax reform measures on the Hill.  A Task Force for Tax Reform was set up by Paul Ryan's Ways and Means Committee.  In the Senate, the Senate Finance Committee looked into International Tax Reform.   While some progress was made, tax proposals are too often put on hold when both sides conclude that the tax reform favored would better serve as a campaign issue.  Jason predicted that tax reform during this election year would not happen.  Although legislators do recognize a need for tax reform, especially corporate, reducing corporate tax rates hit a brick wall when opposed by Democrats.

A sobering thought:  $230 billion is spent on annual interest payments. This amount will balloon to $830 billion in the next 10 years if the nation's debt is not reduced.  Because of the way Washington operates, it means nothing to speak of the debt as half as much as it was a year ago.  Why?  Because things need not be given up.  The attitude is:  If you want something, then I want this in return.  There is only one solution:  Congress must cut spending!

With confidence, vigor, and enthusiasm Jim DeMint mounted the stage to the podium.  The crowd of well-wishers at the InterContinuental Chicago greeted DeMint with a round of applause that reflected their affirmation, admiration, and support of Jim DeMint as CEO of The Heritage Foundation.

DeMint recounted his own remarkable entry into politics at age 47. Prior to his plunge into politics, DeMint had led a busy life.  A father of four, DeMint was involved in his community and with his business of 15 years. Having never thought about party labels, DeMint was a member of neither party.  At some point DeMint began reading policy papers published by The Heritage Foundation. Noting how many of the policies being put into practice were encouraging the wrong behavior, and in agreeing with Heritage on issues such as welfare and the tax code, DeMint came to the conclusion (a Don Quixote moment) that he too must be a Republican in keeping with those defined in Heritage’s policy positions.

As a marketing guy, DeMint knew he had to run on an issue people cared about. Determining that Republicans wanted change, DeMint's slogan became: "Bring Freedom Home." Jim DeMint went to Washington, D.C. in 1999 to save the country, elected by South Carolina's 4th Congressional district.

Speaking from his knowledge and own experience, Jim DeMint revealed what happens when elected officials go to Washington. Seated in a room with other elected Congressional representatives, DeMint was asked to vote in favor of a bill because it would get worse when sent over to the Senate.  DeMint stood up and expressed displeasure, only to be told, "Don't worry you'll get used to it."  The process as explained by DeMint: "You go to Washington to drain the swamp, but like a hot tub, it feels so good to join in.

Cited by DeMint was the twin threat of Progressiveness and the Establishment. Elaborating further, progressiveness involves centralized power where experts make decisions for folk who aren't qualified to make decisions for themselves. Detroit, Baltimore and possibly Chicago were given as examples where governments under central management and control have failed. The Establishment includes those in our won party, who vilify others if they don't fall in step with the establishment movers and shakers.

As DeMint cautioned, this nation has a $19 trillion debt.  She didn't accumulate so much debt without partisanship to arrive at such an astronomical figure.  Government must be created with opportunities for all, but with favoritism toward none, to create a level playing field.  As to the job of The Heritage Foundation, it is not a political organization.  Rather, its responsibility is to be a light — such as the North Star — to guide the thinking of the public through research presented through written and on-line publications.  As DeMint stated, "We can't win the battle from the inside.  The battle must be won by winning the hearts and minds of the people.

Following DeMint comments, Mark Needham, CEO of Heritage Action, addressed the Heritage assemblage. Needham's Heritage Action organization involves citizens at the grassroots level interacting with members of Congress.  A telephone call takes place every Monday night to alert those in Heritage Action's Sentinel Program to what will be happening in the Congress and the Senate during the week to follow. Sentinels then follow up accordingly by contacting their elected legislators. Needham believes that money must be taken away from the government and given back to individuals, and that Washington must be changed from the inside out.

Needham presented this brief history of Heritage Action:  From 1980 – 1990 Heritage made a big difference with its ideas and research papers.  But that was not enough.  As a 501(c)3 organization, The Heritage Foundation could not engage in direct lobbying, so it created Heritage Action to serve as its lobbying and advocacy arm in 2010.

Heritage Action first went to battle with Mark Needham as CEO, over what became Obamacare, following the March, 2010, passage of the Patient Protection and Affordable Care Act.  Republicans were warned not to campaign on healthcare.  However, In July, 2010, Heritage Action launched its first advocacy campaign  targeting the Patient Protection and Affordable Care Act.  By August 2010 the organization had helped to secure 170 Republican co-sponsors for a petition by Rep. Steve King to force a vote on repealing the healthcare reform.

In August of 2013, Heritage Action went into action again with its campaign to link the Patient Protection and Affordable Care Act, also known as the ACA or "Obamacare," with laws to keep the federal government open or to increase the federal debt limit.  Despite the shut-down which resulted, contradicting Republican fears, the Party gained seat in 2014.

Needham reflected whether Republicans were really serious about repealing Obamacare in 2013 when they offered up for negotiation, as a requisite for consideration, Obamacare's Medical-Device Tax which had bi-partisan support. Weren’t there far more important Obamacare issues that needed to be entertained?

There was a invitation made for those in attendance to join the Heritage Action Sentinel Program.  Noted was that citizens who are engaged and informed frighten politicians, when elected officials become aware their votes are being scrutinized by those who elect them.

A reception followed a Question and Answer session.