Trump revisits Chicago Cubs, the Ricketts and his hand size in WaPo interview 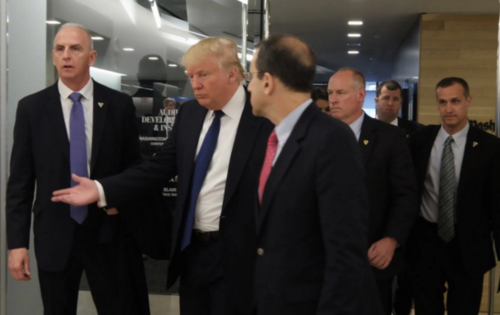 WASHINGTON – Republican presidential candidate Donald Trump visited with the Washington Post's editorial board earlier this week, and among other topics, the Chicago Cubs, their owners and, once again, Trump's hand size were discussed.

Trump said that he wants to Ricketts to stop spending money on ads against him, or he'd run ads against how the Ricketts are running the Chicago Cubs' baseball franchise – even though the Cubs won the 2015 National League Division Series over the St. Louis Cardinals, but came up short of the World Series competition.

Even Sports Illustrated's baseball expert Tom Verducci said last week that “the Cubs are the best team in baseball."

But Trump said the Ricketts have something to hide, even though he doesn't know them.

From the WaPo interview transcript at the 49:00 mark:

HIATT: I’d like to come back to the campaign. You said a few weeks ago after a family in Chicago gave some money to a PAC opposing you, you said, “They better watch out. They have a lot to hide.” What should they watch out for?

TRUMP: Look, they are spending vicious … I don’t even know these people. Those Ricketts. I actually said they ought to focus on the Chicago Cubs and, you know, stop playing around. They spent millions of dollars fighting me in Florida. And out of 68 counties, I won 66. I won by 20 points, almost 20 points. Against, everybody thought he was a popular sitting senator. I had $38 million dollars spent on me in Florida over a short period of time. $38 million. And, you know, the Ricketts, I don’t even know these people.

HIATT: So, what does it mean, “They better watch out”?

TRUMP: Well, it means that I’ll start spending on them. I’ll start taking ads telling them all what a rotten job they’re doing with the Chicago Cubs. I mean, they are spending on me. I mean, so am I allowed to say that? I’ll start doing ads about their baseball team. That it’s not properly run or that they haven’t done a good job in the brokerage business lately.

RYAN: Would you do that while you are president?

TRUMP: No, not while I am president. No, not while I’m president. That is two phases. Right now, look, you know, I went to a great school, I was a good student and all. I am an intelligent person. My uncle, I would say my uncle was one of the brilliant people. He was at MIT for 35 years. As a great scientist and engineer, actually more than anything else. Dr. John Trump, a great guy. I’m an intelligent person. I understand what is going on. Right now, I had 17 people who started out. They are almost all gone. If I were going to do that in a different fashion I think I probably wouldn’t be sitting here. You would be interviewing somebody else. But it is hard to act presidential when you are being … I mean, actually I think it is presidential because it is winning. And winning is a pretty good thing for this country because we don’t win any more. And I say it all the time. We do not win any more. This country doesn’t win. We don’t win with trade. We don’t win with … We can’t even beat ISIS. And by the way, just to answer the rest of that question, I would knock the hell out of ISIS in some form. I would rather not do it with our troops, you understand that. Very important. Because I think saying that is very important because I was against the war in Iraq, although they found a clip talking to Howard Stern, I said, “Well…” It was very unenthusiastic. Before they want in, I was totally against the war. I was against it for years. I actually had a delegation sent from the White House to talk to me because I guess I get a disproportionate amount of publicity. I was just against the war. I thought it would destabilize the Middle East, and it did. But we have to knock out ISIS. We are living like in medieval times. Who ever heard of the heads chopped off?

HIATT: Just back to the campaign. You are smart and you went to a good school. Yet you are up there and talking about your hands and the size of private …

HIATT: Do you regret having engaged in that?

TRUMP: No, I had to do it. Look, this guy. Here’s my hands. Now I have my hands, I hear, on the New Yorker, a picture of my hands.

MARCUS: You’re on the cover.

TRUMP: A hand with little fingers coming out of a stem. Like, little. Look at my hands. They’re fine. Nobody other than Graydon Carter years ago used to use that. My hands are normal hands. During a debate, he was losing, and he said, “Oh, he has small hands and therefore, you know what that means.” This was not me. This was Rubio that said, “He has small hands and you know what that means.” Okay? So, he started it. So, what I said a couple of days later … and what happened is I was on line shaking hands with supporters, and one of supporters got up and he said, “Mr. Trump, you have strong hands. You have good-sized hands.” And then another one would say, “You have great hands, Mr. Trump, I had no idea.” I said, “What do you mean?” He said, “I thought you were like deformed, and I thought you had small hands.” I had fifty people … Is that a correct statement? I mean people were writing, “How are Mr. Trump’s hands?” My hands are fine. You know, my hands are normal. Slightly large, actually. In fact, I buy a slightly smaller than large glove, okay? No, but I did this because everybody was saying to me, “Oh, your hands are very nice. They are normal.” So Rubio, in a debate, said, because he had nothing else to say … now I was hitting him pretty hard. He wanted to do his Don Rickles stuff and it didn’t work out. Obviously, it didn’t work too well. But one of the things he said was “He has small hands and therefore, you know what that means, he has small something else.” You can look it up. I didn’t say it.

MARCUS: You chose to raise it …

TRUMP: No, I chose to respond.

MARUS: You chose to respond.

TRUMP: I had no choice.

MARCUS: You chose to raise it during a debate. Can you explain why you had no choice?

TRUMP: I don’t want people to go around thinking that I have a problem. I’m telling you, Ruth, I had so many people. I would say 25, 30 people would tell me … every time I’d shake people’s hand, “Oh, you have nice hands.” Why shouldn’t I? And, by the way, by saying that I solved the problem. Nobody questions … I even held up my hands, and said, “Look, take a look at that hand.”

Written By Alex Newman   |   01.30.23 As society decays and moves...
Previous article
Bishop Demetrios: Why the U.S. had to officially acknowledge genocide
Next article
Thorner: Smart Meter Dangers: What They Knew and When They Knew It