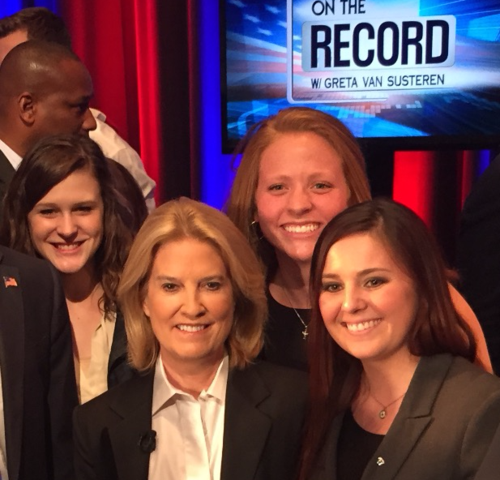 Last night, I attended a live broadcast of "On the Record" with Greta Van Susteren on Fox  News. It was an interview and town-hall with John Kasich. It was held at the Feinberg Theater at the Spertus Institute on Michigan Avenue in Chicago. You can watch a rebroadcast here. Jillian Rose Bernas was selected to ask a question on this national broadcast. She is a CYR and is running for Illinois State Representative in the 4th.

Early in the day, Kasich held two town halls including one I attended in Palatine which was organized by Cook County GOP Chairman Aaron Del Mar.  Del Mar is a Kasich delegate. There were over 1500 people at this event including a Bernie Sanders look a like which brought additional excitement to the event. Later the evening, the 80 Cook County committeeman held their monthly meeting "recommending" John Kasich as their official choice as they are not allowed to "endorse."  Ted Cruz came in second with Donald Trump in a distant 3rd. Each had a surrogate speak for them except for Marco Rubio who had no surrogate and also received zero votes among the 80 committeemen.

The presidential primary is Tuesday, March 25, 2016. Besides voting for your presidential pick, you should vote for their delegates too.