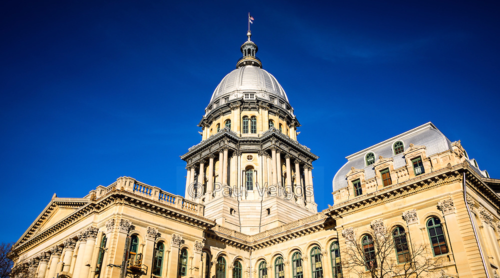 “The impact of lawsuits on small businesses cannot be understated,” State Rep. Keith Wheeler said during a press conference. “Small businesses can adjust to business regulations and higher taxes but lawsuits are the great unknown. One lawsuit can bankrupt a business. It is time we took a stand to protect small business owners by passing meaningful lawsuit reforms into law.”

The press conference was part of the “Rally for Lawsuit Reform” hosted by Illinois Lawsuit Abuse Watch (I-LAW), a grassroots, non-partisan legal watchdog group. Participants kicked off the day with a meeting with Governor Bruce Rauner to affirm their support for his proposed lawsuit reforms and encourage him to keep fighting for reforms in the face of intense opposition from the personal injury lawyers’ lobby.

Illinois is ranked the third-worst state in the country for legal fairness, according to a report last fall from the non-partisan research company Harris Poll. Governor Rauner has proposed lawsuit reforms that will stop personal injury lawyers from shopping around for the friendliest court jurisdiction, even if the lawsuit has nothing to do with that jurisdiction.

This practice, often called “venue shopping,” is all too common in Illinois, explained I-LAW Executive Director Travis Akin. “For far too long, Illinois has been a magnet for personal injury lawyers and plaintiffs from all over the country who travel to Illinois and clog our courts with junk lawsuits that have nothing to do with Illinois, all in the hopes of striking it rich playing our state’s plaintiff-friendly lawsuit lottery. Governor Rauner’s call for reasonable lawsuit reform is a significant step forward in bringing Illinois’ economy back and stopping the flow of jobs to neighboring states.”

John Pastuovic, President of the Illinois Civil Justice League (ICJL), pointed to a study by ICJL, titled “Litigation Imbalance,” that shows how Madison County, Illinois, is continuing to be unfairly targeted by personal injury lawyers looking to cash in playing the lawsuit lottery.

“Creating new and meaningful jobs is the solution for nearly every other major issue facing Illinois today,” explained Pastuovic. “Unfortunately, the data detailed in our study, as well as the findings in other national studies, have made small, medium and large companies justifiably gun shy about our state. Businesses cannot and will not reinvest in Illinois until these established, deep-rooted and documented problems are addressed once and for all.”

Sherman Joyce, President of the American Tort Reform Association, said other states have used common sense lawsuit reforms as a way to attract jobs to their states. “The record is clear: common sense lawsuit reforms create jobs. Illinois has an unfortunate national reputation as a state that creates lawsuits, and that is clearly driving away employers and keeping new ones from moving to Illinois.”

Joyce said Illinois needs more jobs, not more lawsuits, and urged his colleagues to come together to pass lawsuit reforms that will unclog the courts, and speed the legal process for those with legitimate claims.