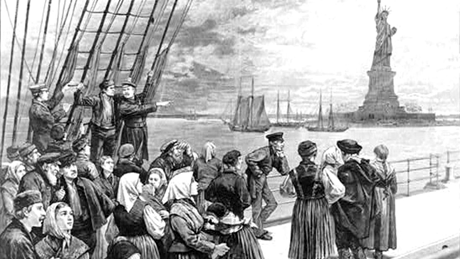 SPRINGFIELD – For some politicians, immigrants seem to be the new scapegoats for America’s woes.

When I hear Donald Trump talk about building a fence along the Mexican border or speak of mass deportations of illegal immigrants, I just cringe.

After all, this isn’t ancient China or Cold War East Germany. We don’t build walls along our borders.

And deportation is just a nice word for “ethnic cleansing.”

Twenty years ago, I was a reporter tromping around the still fresh battlefields of the Balkans and saw the terrible toll ethnic cleansing took in that region.

Catholics were uprooted and sent to Croatia. Muslims were shoved into Bosnia and Eastern Orthodox Christians remained rooted in Serbia.

And many died during that war, targets merely because of who their parents or grandparents were.

We live in a nation that is better than that.

At least I’ve always thought we were.

Trump’s plans would uproot 11 million people, shatter families and destroy neighborhoods based solely on where some people happened to be born.

We need to create a path to citizenship for those who are already here and have a more open immigration policy for those yearning to come here.

For those who believe I have been overcome by sentimentality, I haven’t.

It’s a matter of demographics. Like most Western societies, the native-born U.S. population is aging. Folks are retiring from the workforce and no longer contributing to our nation’s economic vitality.

Look no further than Japan or France to see how aging societies become declining ones.

But the United States isn’t in decline.

Immigrants are keeping us great. Not only do they add to the U.S. population when they come here but they are more likely to have children.

Those who “want to make America great again” need to keep this in mind.

I believe in American exceptionalism.

But this nation isn’t made exceptional by the accident of our place of birth. It is exceptional because of the democratic values we hold dear and our willingness to absorb the ideas and people of many different cultures.

Our first national motto after all was E pluribus unum – out of many one.

That is what has made us great and will keep us great.

Scott Reeder is a veteran statehouse journalist, who has covered government for almost 30 years. He works as a freelance reporter in the Springfield area. He can be reached at [email protected].