Rhoads: What Did President Obama’s State Visit to Cuba Accomplish? 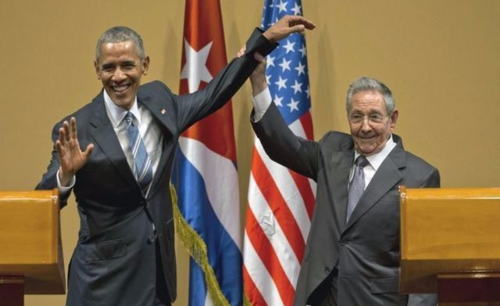 Back in 1959 when Fidel Castro took power in Cuba, moronic left-leaning newspapers in America praised him as the George Washington or the Simon Bolivar of Cuba. Sen. Barry Goldwater called him a Communist and was ridiculed for doing so by the same stupid press. Fast forward to 2016 and the same press praised President Obama for his "historic" visit to Cuba.

Are they free to join a labor union or a club or any political party that is not the Communist Party? Is there due process or a bill of rights in the judicial system of Cuba? Are they allowed to watch TV signals or listen to radio from outside Cuba?

The answer to all of the above is "No."

So what did President Obama accomplish or how did he help the Cuban people by posing in front of a mural of Che Guevara or doing the wave with Raul Castro?

How did Obama advance the cause of freedom in Cuba?