Biga: Trump all the way – with or without you 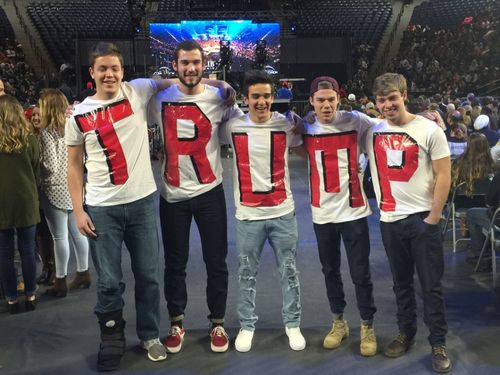 So goes the saying in the famous song by U-2. And how fitting today, as it does indeed describe the state of play in the 2016 Presidential race as well as the Republican Party, because the coming GOP nomination of Donald Trump is more than just a passing populist moment.

It is the beginning of the fundamental re-transformation of the American government in to one that focuses on the needs of the American people rather than the desires of the elites of our country and the world. And this is going to happen with or without those same elites who drove our party and country in to the ground.

No, we have a nominee who is a street fighter and will not be cowered into a blank stare because he feels too uncomfortable to point out the absurdities of the other side.

Trump will turn the tables with his message of focusing on the economic needs of Americans first. This is and always has been a powerful message. It crosses ideological and most importantly ethnic and racial lines.

The old map with the torturous route to 270 is out. 400+ electoral votes is what he will receive. Pennsylvania, New Jersey, Michigan, Ohio and Florida will all fall in to his column. New York, Connecticut and particularly California will be competitive, especially if there is enough waving of the wrong flag in this country.

Americans have been yearning for a President like this. It is surprising that no natural politician save Senator Jeff Sessions has really taken up this message. This is why I ultimately think Sessions will be the VP nominee because he is and has been in tune with ordinary Americans for the last twenty years. It will lend further credibility to the notion that Trump will make significant changes.

These changes will not only be stunning and unwelcome to the Wall Street wing of the Democratic party, but also to the old guard of the GOP. George Will has expressed his hope that Trump loses all 50 states in the election. Christine Todd Whitman indicated she will be writing in John Kasich. The Bush family has indicated they have no intention of coming to the convention and both former Presidents have indicated that they have no intention of commenting on the upcoming election.

Mitt Romney will not be in Cleveland. He says Trump is a fraud. So was his 2012 campaign. Nor will John McCain be there. None of this will matter. By not coming, they are confirming how politically insignificant they have all become. McCain may even lose his Senate re-election bid. I’d vote against him if I lived in Arizona. Good riddance.

As for current politicians, Speaker of the House Paul Ryan is hesitating to get behind the presumptive nominee on the condition that Trump prove he has “conservative values." This is delusional. Ryan’s preferred candidates got clobbered one after the other and largely because of the rejection by the electorate of the economic philosophy which he now wants Trump to embrace.  That would be political suicide and it wouldn’t be “conservative."

Trump’s Twitter response was having none of it though making reference to how badly the American people have been treated and how that is going to change. The Speaker has a primary challenger in Paul Nehlen and he is garnering serious attention. But if Ryan holds on to his seat, he will be on the wrong side of history if he persists in this naivete about how debilitating and therefore unpopular laissez-faire economics really is.

The eclipse of “Republicans” is just starting.

Trump is serious. His first 100 Days will include undoing through executive fiat much of what President Obama did by executive fiat followed by serious work on trade and the border wall along with meetings with foreign leaders to realign our overseas commitments. This is a paradigm shift.

The remnants of the tattered old guard can go hide in a cave if they wish. Or they seek atonement for their neglect of their fellow countrymen all these years by re-evaluating their policy positions and then joining this new movement to help reinvigorate this country. Sincere converts are welcome.

The laissez-faire Kool-Aid they drank can still be stomach-pumped out. But if not, our view is … "America by us, for us, with or without you."