Foster: The long string of presidential sociopaths is about to get longer 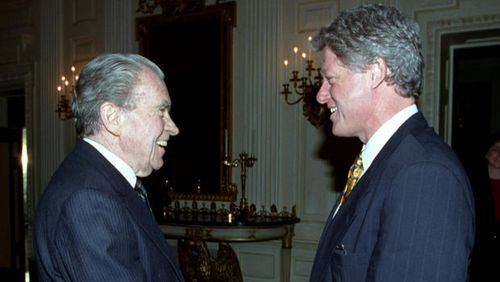 I used to be a member of the American Bar Association, the largest group of lawyers in the country. Among other things, it rates the qualifications of judicial nominees and otherwise tries to police the legal profession. It denounced Richard Nixon after his resignation and encouraged New York authorities to disbar him. He was disbarred though technically he had not been convicted of a crime. That makes sense to me.

Nixon was basically a sociopath and should have gone to prison rather than being pardoned.

Then Bill Clinton left office after the federal judge overseeing the Paula Jones sexual harassment lawsuit found he had committed perjury in his deposition while in office.  She recommended to the Arkansas state bar authorities that he be disciplined.  The ABA said nothing.  Arkansas suspended Clinton’’s law license, finding he lied under oath. He has never practiced law since.

Shortly after leaving office he was asked to speak at an ABA conference and was given a warm welcome.

He, too, was basically a sociopath.

(I tend to believe the allegations of Juanita Brodderick that he raped her while Attorney General of Arkansas and then threatened to destroy her life if she reported it.  His other crimes and misdeeds spanning his entire adult life are well known and need not be repeated here.)

The ABA never so much as rebuked Bill Clinton. I dropped my membership in protest for its double standard. My point is that the public perception of our Presidents is distorted by elite opinion.  Clinton was actually impeached. Nixon was not. But history regards Nixon as a sociopath and Clinton as a fairly successful president. I think they should both be regarded as despicable human beings. But despicable people, even sociopaths,  can do some good things as president, and both did.

Donald Trump is probably a sociopath, though I’m no psychiatrist. He repeatedly breaks the rules the vast majority of people live by, and mostly gets away with it. The media spend most of their time reporting his outbursts and lies. So most of the country believes he is unfit to be president.

Plus he is a Republican, which as the ABA example illustrates, subjects him to the double standard. The antisocial behavior of his opponent, Hillary Clinton, is suppressed. We know about her email scandal. In the coming days the media may or may not report that her private email account was hacked when she was secretary of state, establishing he behavior was worse than reckless.  She compromised national security.

Which is worse?  The politically correct sociopathic Clinton, repeatedly violating federal laws she finds inconvenient, even if it puts the nation at risk, or the crude, politically incorrect Trump violating standards of social conduct?

Trump, to my knowledge, is not a criminal.  He’s just grotesque at times.  Hillary, like her husband, has a long history of destroying evidence, perjury, and other crimes undertaken to attain and hold onto power.

If Trump has any chance of winning this election, he must portray her as the sociopath she is.  Most of the country believes he is one and will not elect him. There is a remote chance the F.B.I. will do this for Trump by recommending her indictment for endangering the nation’s security.  She probably cannot survive being outed  in that manner.

Short of that happening, Trump and his surrogates will need to spend most of the next six months as a sort of shadow grand jury, indicting her conduct as reckless and criminal. This is a very unattractive way of campaigning. I’m not sure it has ever been done successfully.

But Trump supporters have brought us to this point.  They have been willing to overlook his antisocial behavior.  The rest of us cannot.

Howard Foster is an immigration attorney in Chicago.

By Illinois ReviewIn another blow to Illinois Gov. JB...
Previous article
Lawmakers call once again for Auditor General to explain campaign expenditures
Next article
UPDATE: Hultgren joins the “not ready yet” to commit to Trump movement