Independent Map Amendment Passes Petition Test at Board of Elections 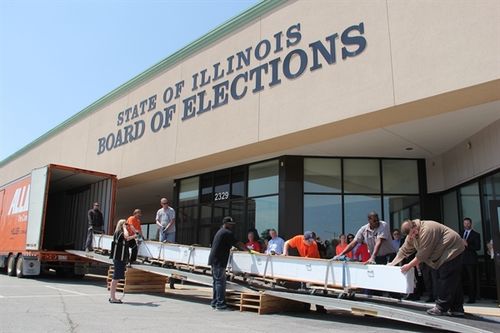 The sampling indicates a minimum of 382,355 and a maximum of 395,021 valid signatures were submitted to the state – well in excess of the 290,216 signatures required by law to place the amendment on the ballot.

“The citizens of Illinois have signaled very clearly with their signatures that they want legislative redistricting reform on the November ballot,” said Dennis FitzSimons, Chair of Independent Maps. “The statewide petition collection was a massive undertaking, and its success was made possible by the dedication of countless volunteers and field staff. The huge number of petition signatures is yet another sign of the strong statewide support for an independent, transparent, and impartial process for drawing state legislative maps.

“Now that the petition review process is complete, we can focus on fighting the lawsuit filed by entrenched political interests looking to deny citizens the chance to change the system,” FitzSimons said. “We will aggressively defend the constitutionality and fairness of the Independent Map Amendment, and we are determined to give voters that choice in November."

The next obstacle will be defending the Independent Map Amendment in court in a lawsuit filed by "entrenched political interests challenging its constitutionality," a press statement says.

In other words, the Democrat legislative leadership that does not want the amendment on the November ballot.