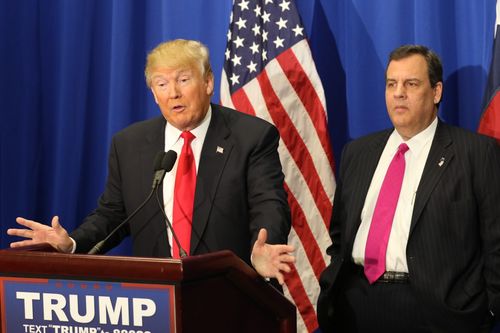 NEW YORK – While many were surprised at Republican candidate Ted Cruz's announcement that Carly Fiorina would be his running mate if he were to attain the party's nomination,Monday, Donald Trump leapfrogged Cruz's announcement by announcing who would serve as his Transition Team Chairman if Trump were to be elected president.

Governor Chris Christie (R-NJ) will serve as Transition Team Chairman, the Trump campaign said. Mr. Trump is the presumptive Presidential nominee for the Republican Party and continues to take critical steps to gear up for the general election against potential Democratic nominee Hillary Clinton, or whoever.

“Governor Christie is an extremely knowledgeable and loyal person with the tools and resources to put together an unparalleled Transition Team, one that will be prepared to take over the White House when we win in November. I am grateful to Governor Christie for his contributions to this movement,” Trump said in a statement.

Governor Chris Christie will serve as Transition Team Chairman, overseeing an extensive team of professionals preparing to take over the White House, and all that entails, in the fall. "Governor Christie has been a loyal supporter and confidante to Mr. Trump and the campaign," the statement said. "He has been entrusted to oversee this important task with the goal to implement this team in an official capacity in November."

Governor Christie said, “I am honored by the confidence being placed in me by Mr. Trump and look forward to putting together a first rate team to assemble an administration to help best serve the President-elect and the nation.”

Mr. Trump has begun shifting towards a general election strategy and implementing an infrastructure capable of securing a victory including making key hires, building a finance operation to benefit the Republican Party and unifying the party by working with several Republican leaders now voicing their support for Mr. Trump and his candidacy.

He has yet to announce his possible vice-presidential pick.

Written By Alex Newman   |   01.30.23 As society decays and moves...
Previous article
O’Brien: Cruz voters must abandon indulging their egos and vote Trump
Next article
Starkehaus: Voting for the Lesser of Two Evils Requires a Lesser of Two Evils