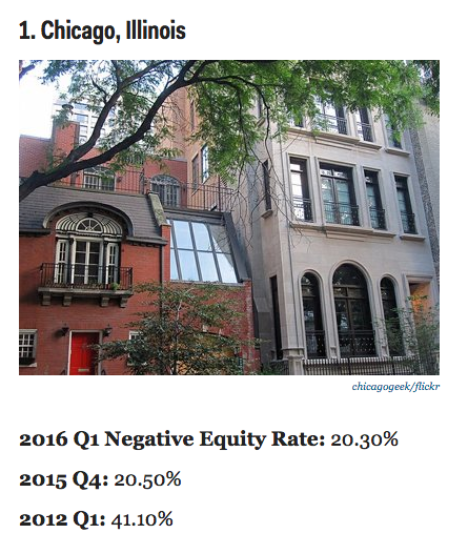 The good news is that the number of homes in which the homeowner owes more than their houses are worth has dropped by 50 percent since the depths of the housing bubble burst in 2012. 2016's first quarter showed a 20.30% negative equity rate (or one in five homes being underwater) compared to 2012's first quarter, which Chicago showed a 41.10% rate (nearly one in two homes showing negative equity).

"For years, Las Vegas has been the prime example of the housing bubble and bust, with nearly three-quarters of mortgaged homeowners underwater when the market bottomed out in the first quarter of 2012," Zillow reported in its latest "Negative Equity Report."

It continued: "But Chicago now has the highest negative equity rate among large U.S. markets, surpassing Las Vegas in the first quarter of 2016."