Illinois’ RNC Committeewoman on the convention frontlines for Trump 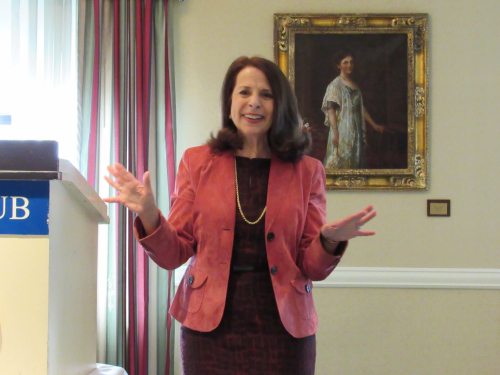 PEORIA – Illinois' National Committeewoman Demetra DeMonte is one of several national party leaders that are doing all they can to ward off any convention efforts to undermine Donald Trump's nomination.

Demonte told Illinois Review Saturday that as a member of the Convention Rules Committee, she was asked to serve on a five-member sub-group whose assignment is to prepare for any potential amendments that could come before body.

For DeMonte, the RNC nomination process and its standing rules are absolute.

"Donald Trump ran for office in the rules that were established. Delegates accepted the role of delegate with full knowledge of the rules. If someone wants to change how we elect a nominee, then the time to discuss that is before the election cycle," DeMonte said in an interview.

She and the other study group members are hearing arguments from the #NeverTrump movement supporters, such as conservative columnist John Di Leo, a Republican from DeMonte's home state. He says the primary process made it clear upon which issues the party's base is focused, but the process failed to select a "proper" candidate.

"Our ever-more insufficient education system has produced generations of people who perhaps no longer fully appreciate the difference between the primaries and the general election," Di Leo said. "The primaries exist to assist the parties in choosing who would be their best 'champion' for the general election. They select delegates, in various ways, but their purpose to help the party make an informed choice, not dictate a potentially uninformed choice."

"The primary process this year succeeded in communicating to the party that the base wants to focus on the problems of big government, job losses, stagnant wages, loss of manufacturing to foreign shores, and an unassimilatable influx of immigration that threatens our culture and our identity," he said. "This is a good thing. However, the candidate who carried that message in the primaries is not a proper candidate for the fall. This is beyond dispute."

Then she honed in on the #NeverTrump movement.

"The real question here is do a handful of delegates think their voice is more important than 14 million voters?"

Di Leo and his like-minded Republicans unhappy with Trump as the nominee look for convention delegates to "do what they need to do" and pick the candidate that reflects their consciences.

"We need the delegates to select a proper, experienced Republican to serve as the party's champion in the fall – one who carries forth those messages, but has the necessary experience as a governor or senator to be both trustworthy and winnable in the fall campaign," he said.

DeMonte said the plan won't be successful when Republicans gather in Cleveland in mid-July.

"You don’t change the rules of the game after the game has started. My conclusion: these few delegates will not succeed because we are a bottom-up party. As a party, we respect the voices and votes of our voters back home who take time out of their busy lives to participate in this process," she said. "We will not allow a handful of people to disenfranchise 14 Million of our voters by nullifying the results of our primaries and caucuses."

The study group on which DeMonte serves is made up of prominent Trump supporters, including the Trump campaign's attorney William McGinley and Vincent DeVito, a Trump supporter from Massachusetts, along with Bill Palatucci, a Republican National Committee representative from New Jersey and Alex Willette, an RNC committeeman from Maine.

So, after reviewing her pro-Trump comments during the IL GOP State Convention and recalling her prominence among the most conservative members of the Republican National Committee, we asked the obvious question: Was DeMonte a Trump supporter in Illinois' March primary or had she jumped on board as a good Republican after he emerged as the presumed nominee?

She hesitated for a moment, and then came clean.

"I would never tell before the primary who I was going to vote for, but I voted for Donald Trump."

She had her reasons ready to enumerate. "I encouraged others to think about the most important issues facing our country and the future of our children," she said. "After a trip to back to Greece last year, the two most important issues for me was immigration and trade. Donald Trump focuses on those two issues."

But now everyone should focus on getting Trump elected in November, she said.

"We live in a representative democracy.  The people have spoken. Let us now rally around our candidate so we can be victorious in November!"