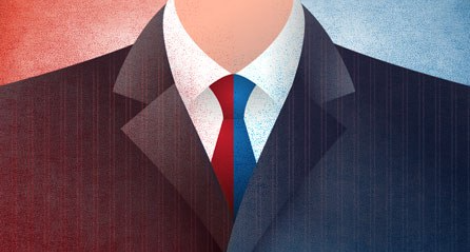 To me, it’s much more important to identify with ideas rather than whether someone has a “D” or an “R” after their name.

Typically, I split my ballot between both Republicans and Democrats.

That may surprise some people, because I typically write about economic issues.

But I’m a fiscal conservative and a social moderate.

I believe in small limited government. But I’m appalled by how conservative “get tough on crime” talk has resulted in the incarceration of millions of non-violent individuals.

And while my faith is important to me, government shouldn’t impose any religion’s beliefs on society as a whole.

To be honest, I stand afraid when I see the party of Abraham Lincoln about to nominate a hateful, small-minded bigot to be its presidential nominee.

I hear some Republicans say they don’t support Donald Trump because they don’t believe he can win.

I’m just the opposite. I don’t support Trump because I’m terrified that he may.

When I heard U.S. House Speaker Paul Ryan was breaking a long silence and (reluctantly) supporting Trump, I cringed.

It brought to mind the relationship between Rod Blagojevich and Illinois House Speaker Michael Madigan.

Madigan hinted broadly about unspecified Blagojevich “indiscretions” when he first ran for governor. And after giving Blagojevich free reign for his first year in office, he formed a coalition of Republican and Democrat House members to stop him.

But then Madigan co-chaired Blagojevich’s reelection campaign even though he faced an honorable, moderate Republican, Judy Baar Topinka.

And shortly after Blagojevich won reelection, Madigan led the charge to impeach him – in part for things that were publicly known when he co-chaired his campaign.

For Madigan, party loyalty trumped the needs of the state.

House Speaker Paul Ryan is making the same mistake. He is putting his loyalty to the Republican Party ahead of the needs of our nation.

The Democrats are nominating a woman I just don’t agree with on the issues.

And the Republicans are putting forward a bully, who aspires to be a demagogue.

This nation doesn’t need a Mussolini-lite.

Neither Clinton nor Trump will get my vote.

I’m tired of having to choose the lesser of two evils.

But I won’t stay home in November. I’ll vote for a third-party candidate.

And, no, I’m not foolish enough to think Libertarian Gary Johnson will win.

But at least I will have voted for someone who I agree with on most of the issues.

Isn’t that what democracy is supposed to be about?

Scott Reeder is a veteran statehouse journalist. He works as a freelance reporter in the Springfield area and can be reached at ScottReeder1965@gmail.com.