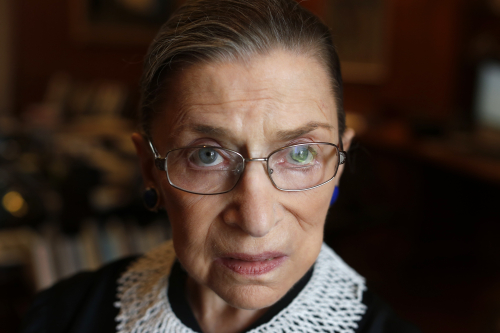 “On reflection, my recent remarks in response to press inquiries were ill-advised and I regret making them," she said in a statement. "Judges should avoid commenting on a candidate for public office. In the future I will be more circumspect.”

One IR reader Tweeted a different take on Ginsburg's comment: 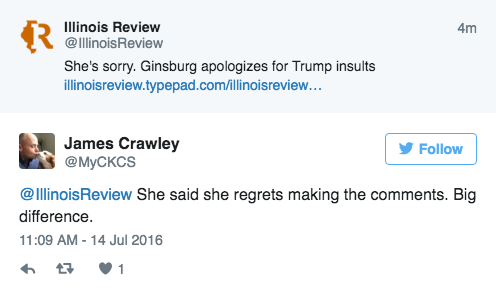 Earlier this week, Ginsburg told the New York Times that she couldn't bring herself to think about Trump as president.

“I can’t imagine what the country would be with Donald Trump as our president,” she said in the interview. “For the country, it could be four years. For the court, it could be — I don’t even want to contemplate that.”

Ginsburg then called Trump a “faker” in a CNN interview, saying “he really has an ego.”

Trump, of course, did not hesitate to respond.

"She's a disgrace to the Supreme Court. For her to politicize the Supreme Court, this is all the more reason I hope I win, because I have 11 justices who are incredible justices, highly respected by all, including liberal people,” he told Fox News Wednesday, referring to a list of potential court picks he released earlier this year. The candidates were recommended by conservative grouops Heritage Foundation and the Federalist Society.

“For her to come out and say [these] kind of things, there's almost something wrong with her," Trump added.