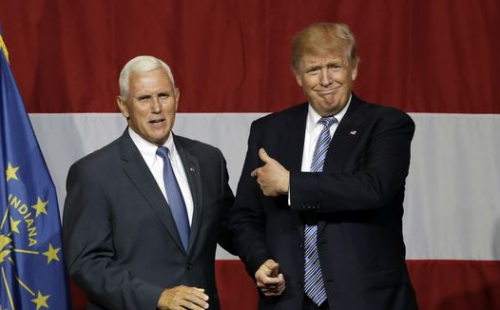 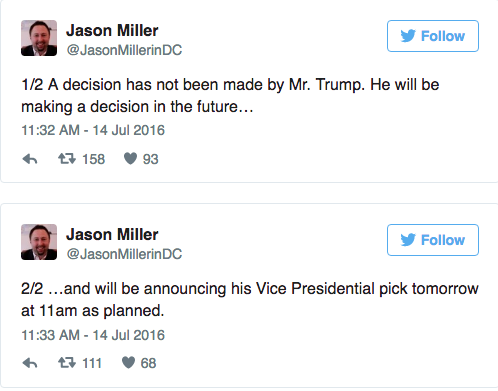 Still, the IndyStar has confirmed that Trump will announce Pence as his selection for vice president, ending aweeks-long vice presidential casting call during which Trump vetted a handful of high-profile Republicans. A formal announcement is expected in Manhattan on Friday. The long-awaited decision upends the political landscape in Indiana and at least partially remakes the Trump campaign in Pence’s image.

UPDATE x1: Illinois U.S. Senator Mark Kirk told Bloomberg Politics he was rooting for Pence to be Trump's pick – but then his staff re-confirmed that Kirk would not support Trump.

"I hope he gets the nod," said Illinois Senator Mark Kirk, a former congressman. "I love Mike. He was the leader of the conservatives and I was the leader of the moderates. And we had a mutual admiration society." (Kirk, who's up for reelection, said "we'll see" when asked if he'd reconsider backing Trump if Pence is chosen, but his spokeswoman later called to say he would not back Trump no matter who the running mate is.)

It looks like he’s going to be the pick, I mean otherwise they’re really leading him on, it’s like going out on prom but he , at the end of the day, I think is going to end up being him and I think he would be good for Donald Trump,” Kinzinger said. “He brings kinda some government experience, which you have to have. There has to be government experience to run a government, so he can bring that.

But Kinzinger said he does worry that a Trump – Pence ticket doesn’t have enough foreign policy experience.

In Pence, Trump has added a social conservative who GOP strategists say will reassure rank-and-file Republicans that Trump can be trusted to pursue their interests. Veteran political observers say Pence, a former U.S. House member and chairman of the House Republican Conference, will provide a disciplined counter to Trump’s improvisational campaign style. Pence also brings fundraising power and credibility on a wide range of policy issues that are important to conservatives.