Will Mark Kirk once again be the only Republican to support sanctuary cities? 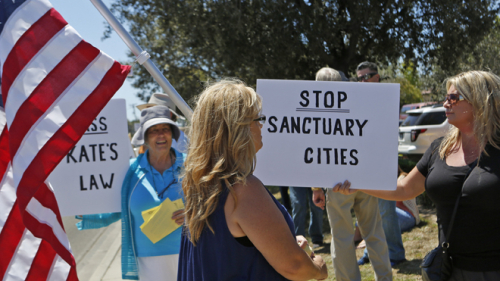 WASHINGTON – The U.S. Senate will be voting on an immigration measure called "Kate's Law" in memory of Kate Steinle's death a year ago allegedly at the hands of an immigrant that had been deported six times.

Wednesday, the Federation for American Immigration Reform issued a call for Illinoisans to contact Senators Kirk and Durbin before the vote.

Friday marked the one year anniversary of Kate Steinle's murder in San Francisco by an illegal alien with seven convictions and five previous deportations. Kate's death was a direct consequence of San Francisco's status as a sanctuary city — state and local jurisdictions with policies that impede the enforcement of federal immigration law. These lawless policies, enacted in over 300 jurisdictions nationwide, needlessly endanger American lives and all too often result in preventable tragedies.

Despite the public outrage over Kate's murder, Senate Democrats denied justice for the Steinle family when they voted against a bill that would eliminate sanctuary jurisdictions. Last October, Sen. David Vitter's (R-LA) "Stop Sanctuary Policies and Protect Americans Act" (S. 2146) failed 54-45 (with 60 "yes" votes needed). All Senate Democrats except Sens. Joe Donnelly (D-IN) and Joe Manchin (D-WV) placed partisan politics over sound policy and voted to kill the bill. Pro-amnesty Sen. Mark Kirk (R-IL) was the only Republican to vote against the bill, while Sen. Lindsey Graham (R-SC) did not cast a vote.

Today's votes are incredibly important and the choices are clear: YES votes on S. 3100 and S. 2193 demonstrate that your Senator values protecting the safety of law-abiding American citizens; a NO vote on either measure shows that they are in favor of protecting criminal aliens — individuals who not only violate our immigration laws, but our criminal laws as well.

Call your Senators and tell them:

Make your voice heard! To find your Senators, click here.

After you call your Senators, please make these same points on their social media accounts.