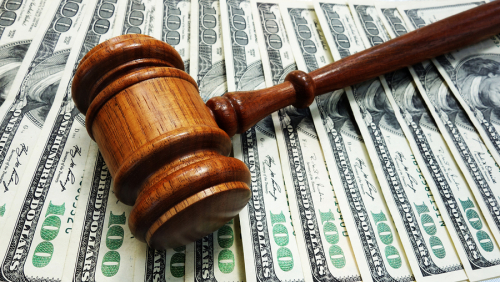 METRO-EAST -  A study released Friday from grassroots legal watchdog group Illinois Lawsuit Abuse Watch (I-LAW) finds the Metro-East’s status as a haven for lawsuits has led to county governments here being sued frequently, costing area taxpayers millions of dollars each year – millions that could have gone to hiring more police officers or teachers or improving more parks and roads.

In the study, titled “Lost to Lawsuits: How Abusive Lawsuits in the Metro-East Drain Municipal Budgets, Force Service Cuts and Suppress Job Growth,” I-LAW found that from 2010-2014, the St. Clair and Madison County governments spent a combined $17.1 million defending themselves against lawsuits.

“It has become painfully clear that St. Clair and Madison County governments are perceived as easy marks by some personal injury lawyers,” explained I-LAW Executive Director Travis Akin, “and as a result, millions of dollars of taxpayers’ money is being drained away from already-squeezed municipal budgets, forcing budget cuts that affect us all. It is now clear that the Metro-East’s longtime national reputation as the ‘Lawsuit Abuse Capital of the U.S.’ not only drains jobs from the area but also drains money for teachers, police officers, new parks and road repairs, to name just a few of the budget cuts that result from municipalities being targeted with lawsuits.”

Specifically, the $3.14 million spent on litigation-related costs in Madison and St. Clair Counties in 2014 could have been used for other, more valuable services and programs, such as:

Madison County Board member Tom McRae said the cost of litigation is a constant concern for local governments: “There are always tough budget decisions that have to be made every year. We do not have unlimited funds. Money spent on litigation could be spent to hire more police officers or to repair roads and bridges. We cannot afford to keep shelling out money on junk lawsuits.”

The new I-LAW report also points to the close connections between area judges and personal injury lawyers as a reason why Madison and St. Clair counties are “magnets” for lawsuits. Madison County Circuit Judge Barbara Crowder was removed from her role overseeing the asbestos docket in late 2011 when it was revealed that plaintiffs’ attorneys who had given $30,000 to her reelection campaign had been granted choice trial slots just a few days later.

Just this past year, Madison County judges appointed a personal injury lawyer from the leading asbestos plaintiffs’ firm in the Metro-East to a coveted circuit court judgeship despite only being six years removed from law school.

“We’ve known for a long time that the cozy connections between personal injury lawyers and Metro-East judges has driven businesses out of our area and stopped new employers from relocating here,” explained Akin, “but our new report shows that judges who allow personal injury lawyers to game the system for their own personal benefit are essentially draining taxpayer dollars from our county budgets and costing us valuable programs and services.

“One of the most basic ways to stop lawsuit abuse in the Metro-East is to elect judges who will stand up to the personal injury lawyers and say no to frivolous lawsuits. With their tremendous power over what takes place in their courtrooms, judges can help the Metro-East shed its reputation as a ‘plaintiff’s paradise.’

“Personal injury lawyers have flocked to Madison and St. Clair County courts for a reason, and it is up to the judges in those courts to restore balance to their courtrooms, which in turn will decrease the number of lawsuits filed there and against local governments.

“Many judges will be on the ballot this year, and voters should do their part to stop lawsuit abuse in the Metro-East by learning more about judicial candidates, including whether or not they take campaign contributions from personal injury lawyers and whether they sanction lawyers who file frivolous lawsuits.”

Akin concluded, “Who is serving on the bench matters. Electing good judges who apply doctrines of common sense and fairness will help stop taxpayer dollars from being wasted fighting frivolous lawsuits.”.