NEW YORK – Donald Trump's campaign was jostled yet once again Tuesday night. Now former Cruz pollster Kellyanne Conway is managing the campaign and Breitbart News' CEO Stephen Bannon is the campaign's CEO. Bannon is temporarily stepping down from his news' position, a press release from the campaign says.

Paul Manafort will remain as Campaign Chairman and Chief Strategist.

“I have known Steve and Kellyanne both for many years. They are extremely capable, highly qualified people who love to win and know how to win,” said Mr. Trump. “I believe we’re adding some of the best talents in politics, with the experience and expertise needed to defeat Hillary Clinton in November and continue to share my message and vision to Make America Great Again. I am committed to doing whatever it takes to win this election, and ultimately become President because our country cannot afford four more years of the failed Obama-Clinton policies which have endangered our financial and physical security.” 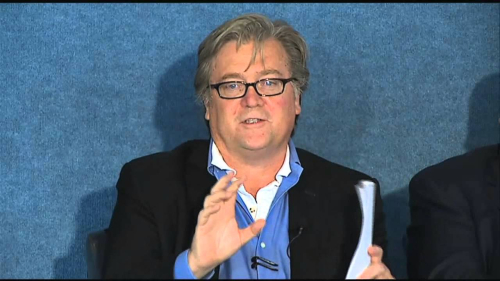 These announcements come with the first major TV ad buy of the general election slated to start later this week and with additional operatives joining the movement on a near-daily basis.

Mr. Bannon, once recognized by Bloomberg Politics as the “most dangerous political operative in America,” will oversee the campaign staff and operations in addition to strategic oversight of major campaign initiatives in addition to working with Mr. Manafort.

Ms. Conway, a highly sought-after pollster, will work on messaging and travel frequently with Mr. Trump, while working closely with Mr. Bannon and Mr. Manafort on all aspects of the campaign moving forward.

Paul Manafort, Campaign Chairman added, “It is imperative we continue to expand our team with top-tier talent. Steve and Kellyanne are respected professionals who believe in Mr. Trump and his message and will undoubtedly help take the campaign to new levels of success.”