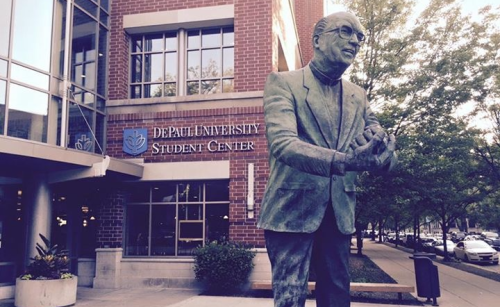 Earlier in the year, the DePaul Republicans were told they could not chalk. Chalking is the act of writing political messages on a sidewalk that will wash away with the next rain causing no permanent damage. Apparently chalking something like "Trump 2016" offended somebody causing emotional distress. Illinois Review reported on this in April.

Just this week, another conservative Ben Shapiro was told he could not speak here with the University sighting security concerns. This event was to be sponsored by the Young America's Foundation. Shapiro appear on the Megyn Kelly Show with the clip below.

A couple months ago former presidential hopeful Rick Santorum was allowed to speak to a small group under heavy security at DePaul.  Santorum often speaks about the sanctity of life and pro family issues, which I guess is too controversial. I arrived five minutes late and was not allowed to enter due to security concerns. It appears I was banned. That speech went off without a hitch but there was a huge security presence of DePaul security, private security, 35 administrators, and Chicago Police. I left the DePaul event to head up to Northwestern University to hear another conservative speaker coincidently the same night. That speaker was John Stossell, author and Fox News contributor. I was late for that event yet entered without incident as there was no visible security there. Some good news here for free speech. DePaul College Republican Vice President John Minster (sophomore) got the chance to ask a question of President Obama during a town hall on race relations and police held in Washington DC.  "Why always look at these situations through the prism of race?" Minster asked. The president answered resulted in a 12 minute somewhat rambling rant.

See the full clip below from ABC NEWS. .

Free speech is under attack in America. The question is, will DePaul University continue this practice with censoring conservatives? We hope they change their minds.

Mark Weyermuller is small business person, real estate professional, and conservative activist in Chicago. He is a citizen journalist and regular contributor to Illinois Review. Mark can be heard weekly on the radio in a "man in the street segment" at 10:31pm as a regular guest on the Stephanie Trussell Show heard Sunday nights 9pm-midnight on WLS 890-AM.