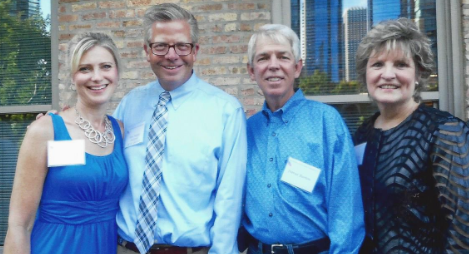 The 25th Annual Family-Pac Boat Cruise held on Monday, July 25, was a great success aboard The Fort Dearborn, which left from the North Pier in Chicago to cruise out on Lake Michigan with 125 dedicated Family-Pac members and friends on board. Among the participants were many elected politicians, those running for re-election, and first time candidates. Once the cruise was underway, a hearty buffet dinner was served below deck to be enjoyed by guests as they watched the Chicago skyline while seated at tables on the upper deck. Sandy Rios, fresh from the GOP Cleveland convention, served as the Master of Ceremonies, as she has for many of the Family Pac annual cruises.  Sandy is Director of Governmental Affairs for the American Family Association, one of America's largest, pro-family grassroots organizations. Based in Washington, DC, and host of "Sandy Rios in the Morning on AFR Talk" which can be heard on nearly 200 stations through the American Family Radio network.

The program opened appropriately with the a prayer given by Rev. Bob VandenBosch of Chatham, head of One Nation Under God Foundation, followed by the "Star Spangled Banner" sung by opera singer Nadine Vorenkamp.

Every year Family-Pac presents the "Person of the Year" award.  This year's award was presented to featured speaker, David Barton, a famed Christian historian, who Family PAC founder and executive director Paul Caprio called "a great Christian patriot and American".  Caprio further noted that although many people stand up for values, unlike Barton, they don't have the courage to stand up against powerful forces to say "no" when no must be said.  David Barton is the Founder and President of WallBuilders, a national pro-family organization that presents America's forgotten history and heroes, with an emphasis on our moral, religious and constitutional heritage.  Check out Barton's book, "The Jefferson Lies: Exposing the Myths You've Always Believed About Thomas Jefferson."

Following the honoring of David Barton, Rep. Randy Hultgren (R -14th) was presented Family-Pac's "Congressman of the Year" Award for standing strong for principle, as when Randy voted against the $1.14 trillion spending package sent by Congress to President Barack Obama to avoid a government shutdown. Randy was also cited for his work on Abstinence Education.

For those who were fortunate to attend the reception held by the One Nation Under God Foundation prior to the cruise at the Pinstripes restaurant, 435 E. Illinois St., Chicago, IL, David Barton expounded upon "Freedom of Conscience" as it was originally meant to be known.

As expressed by Barton:  "We have lost the "Right of Conscience" 1) because we don't teach history any more, and 2) because we no longer understand what an inalienable right is.  They are rights coming from God and not the government, period."

Consider this quote from Thomas Jefferson:

"No provision in our Constitution ought to be dearer to man than that which protects the rights of conscience against the enterprises of the civil authority."

When the Founding Fathers talked about the 1st Amendment it was always in terms of conscience.  Right of Conscience, once considered the highest clause in the Constitution by our Founding Fathers, is now the one that is so readily being trashed: a cake must be baked, photographs must be taken, or pizza's delivered, which are all forced participation to honor tender consciences.

If the Right of Conscience cannot be protected as an inalienable right, then the government is going to regulate everything below that as well. This is what we are seeing across the country today. It's not permissible for you to express your free speech or to exercise your conscience; instead, we're going to force you to endorse what we do and participate in it.

In speaking about the state of the church, Barton presented these disturbing facts.  Never before has this nation faced the high rate of Bible illiteracy as exists today.  76% of Protestants do not want to see abortion overturned.  In comparing how Christians and non-Christians deal with moral issues, David Barton quoted figures that spoke of no difference between Christians and non-Christians.  Striking fact included:

As far as what make a church successful, a successful church was equated with the size of its congregation, amount of offering received, the number of programs offered, how many are on the staff, and the square feet covered by a church.  Instead of expressing concern over why the thinking of Christians and non-Christians is virtually identical on moral issues, a numbers game is being played

David Barton speaks on board The Fort Dearborn

Aboard The Fort Dearborn, participants were captivated by David Barton's remarks about this nation's exceptionalism and of his participation in the GOP Convention.

Speaking of the "Constitution", Caprio reminded guests that God is wisdom and that our rights come from God. Not being able to count on our public schools or society to promote Christian values, he introduced Barton as a great Christian patriot. educator, and American.

David Barton's initial remarks were of his participation in the GOP Cleveland Convention. This is the seventh convention David has attended and his third time on the Platform Committee as the male member of the Texas delegation (one male and one female member is sent by each state – 112 delegates in all).  Two conservative Republicans were selected to represent Illinois on the Platform Committee, Jack Lynch and Stephanie Holderfield.  Stephanie was also a participant in the cruise and spoke about proudly about her role.  Although platforms can be influenced by the delegates themselves, by input from outside group, and by party elites stiff arming parts of the platform, Barton believes that what emerged from the Platform Committee was the most conservative Republican platform ever.

Donald Trump didn't try to interfere, but instead left all up to those assigned to write the platform.

The 1st sentence of the 2nd paragraph of the "Declaration of Independence” sets forth these two principles that are unique to this nation:

Article VII (known as the Ratification Clause), although the last and shortest of the Constitution's articles, made possible the enactment of the legal and political process that was needed to replace the "Articles of Confederation" with the "Constitution of the United States."   Article VII not only expressed the Constitution's view of the Union, but it also echoed the Declaration of Independence's view of the relation between positive and natural law.

When speaking about the lack of knowledge of this nation's history among high school students and adults alike, Barton compared the results of tests taken by immigrants to become American citizens and those of students and adults.  While 93% of immigrants could answer the questions, only 3% of high school students could pass the test. 70% of Americans did not know that the Constitution was the supreme law of the land.

As The Fort Dearborn headed back to its mooring at Chicago's North Pier, and with the skyline of Chicago and Navy Pier now lit up to create an impressive sight, the singing of patriotic songs, led by Sandy Rios, capped off a beautiful and inspirational evening.  What has become a yearly highlight was Joe Scheidler (Pro-life Action League) leading the singing in the "Battle Hymn of the Republic.”

Caprio's final remarks as the boat pulled into dock: "Now it's time for all of us to get to work, register more value voters, and get them to the polls in November to elect our pro-family candidates…From top to bottom."