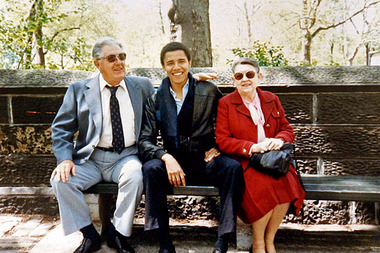 A young Barack Obama with his mother's parents

A few months back, in response to the terrorist murders in Nice, France, our Dear Leader, in his most supine and politically-correct form, gave a speech to a group of foreign ambassadors about how terrorism would ultimately be defeated in the long term. Surely, young people – no matter what their race or ethnicity – would someday see the benefits of globalism and would turn away from the “chronic impulses” that now urge certain more nationalistic and sectarian elements of the world towards preferring their own kith, kin and religious group and resorting to terrorism to protect it.

Now, as a high school teacher and as someone who comes in to contact with people of varied backgrounds and faiths every day, I stress to my students that one should treat each person based on his/her individual merits. But at the same time, I know that deep down I have (and we all have to a certain extent) more of an affinity for my own ethnic group and religion. Like most people, I am comfortable with my own “tribe” and religion and do not wish to engage in a lot of experimentation just to make others feel better or just to be cool and say I embraced “diversity”. Barack Obama has distilled this natural feeling of most people down to a mere instinct or “impulse”, which the Cultural Marxists like himself must train us to ignore.

But whether it is an affinity or an “impulse”, what is the true nature of these feelings on our part? The answer, in laymen terms, is that we are more disposed to help those who are most like us biologically (or our family). In technical terms this is called "Fossil Kin Altruism."

This anthropological theory posits that individuals are more likely to commit acts of self-sacrifice to help others who share or carry their genes because by doing these acts of altruism one is helping one’s own genes propagate in to the future. Whether it is something as stark as a father pushing his son out of the way of a moving car and getting hit himself or more mild like an aunt without children helping to pay for the college tuition of a niece, the idea is that these direct sacrificial acts will help the individual donor indirectly through continuation of the bloodline.

Think about how tied in one is with one’s ethnicity. A little math will perhaps illuminate just how clear this is.

Go back 500 years or about 20 generations and you get 1,048,576 eighteenth great grandparents. Surely now, with most people in your ethnic group, you share a common relative. In fact, because of geographic limitations back in the 1500s, there was a lot of cousin marriage and many of the 1,048,576 can be cut down to a smaller number of actual ancestors. So you are closer to them ethnically than you might even think.

Go back long enough, say 100 generations, and you have an impossibility as the number of ancestors you theoretically have exceeds the total number of human beings who ever lived by trillions.

So, what I am saying here is that the “chronic impulse” that Barack Obama and his fellow globalist travelers want to suppress is what most of us would refer to as “family." If one assumes that Obama is actually sincere, he wants us to basically make no distinction between those who are closest to us biologically and those who are a lot more distant, if related at all. (The Out of Africa theory is not the only valid theory on human origins).

And think about how perverse this really is. Liberals want humans to accept some idealized social construct that they created so they can feel better about themselves (or rule the world), yet we are supposed to ignore our own biology. Yet liberals, in their quest to prove God is dead, are also apt to point out that human beings are mere collections of cells in a cold and unforgiving universe. If so, shouldn’t we do what comes to us biologically? Shouldn’t we follow our “chronic impulses” because they are biological and natural signals that animals use to continue the species?

Evidently not… but then liberals have never worried too much about ideological consistency, have they?